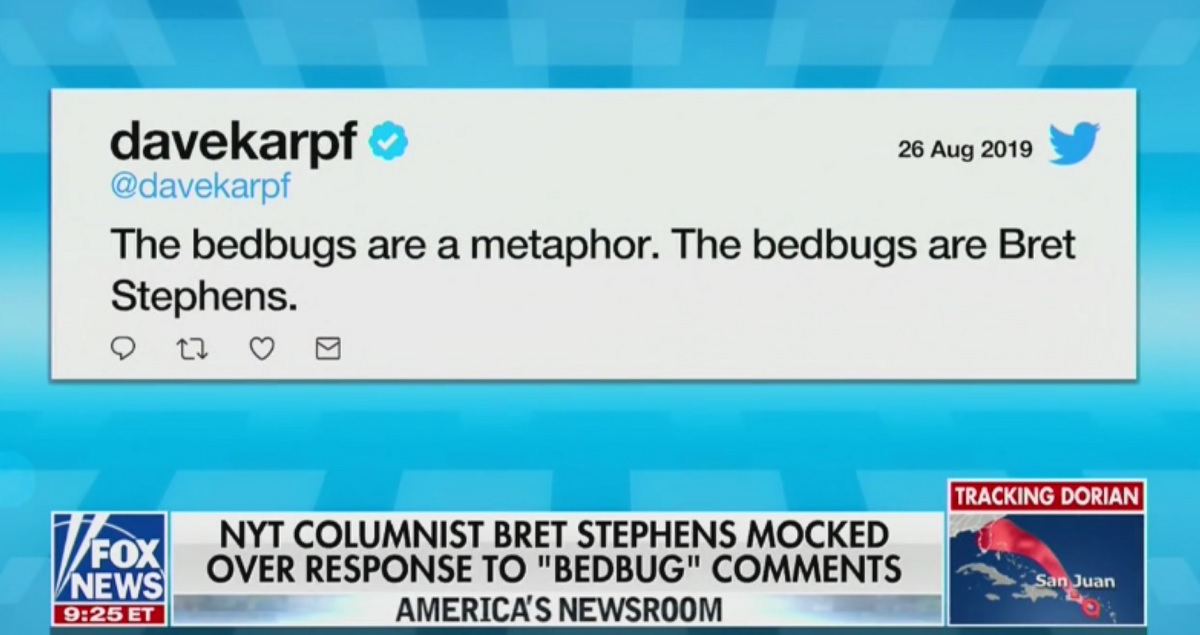 Fox News made the same grievous error that MSNBC did when it displayed a blue “verified” checkmark in a graphic depicting the unverified Twitter account of Professor David Karpf, the man who composed the “bedbug” tweet that sent Bret Stephens off the deep end.

You may recall that a few weeks ago, blogs and Twitter users freaked out because MSNBC used a little “verified” checkmark in an onscreen graphic depicting a tweet from Media Matters researcher Bobby Lewis, whose Twitter account is not verified.

Well, on Wednesday morning’s edition of America’s Newsroom, Fox News did the exact same thing. In a segment on the implosion of New York Times writer Bret Stephens over being called a metaphorical “bedbug,” the network displayed a graphic of the original tweet, but with a twist: suddenly, “@davekarpf” had a verified blue Twitter checkmark!

The graphic remained onscreen for five full seconds, but we’ve slowed it down and enhanced it as well, just to be sure you don’t miss it.

We’ve also saved screenshots of the graphic in multiple resolutions, just in case anyone tries to scrub the evidence.

But as Mediaite’s Caleb Howe pointed out in our original story on the outrage over MSNBC’s misstep, this wasn’t a case of altering a photo of a tweet, it was a network-generated graphic of a tweet, and thus in both cases could likely have been an oversight.

Even if Fox News — or MSNBC — had deliberately added the blue check, however, it’s not like they were conferring legitimacy to some anonymous rando on Twitter. In both cases, the unverified Twitter accounts belonged to people whose identities are well-known and confirmed.

Maybe each network should fashion its own makeshift verification icon to avoid these scorching-hot controversies in the future. Perhaps a fox or a peacock making a “thumbs-up” gesture.

Still, cable news critics are known for their consistency, so the same people who complained about MSNBC will no doubt do the same for Fox News. Let’s all hold our breath.