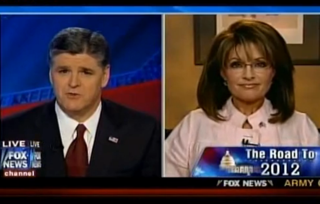 Given the stranglehold Mike Huckabee, Donald Trump, and Newt Gingrich have had on the 2012 cycle, it feels like it has been a long time since anyone has seen Sarah Palin. Palin’s presidential ambitions were put into question tonight once again by Sean Hannity, who accurately noted that much had changed since she last said she was “assessing the field”– except for the fact that Palin is still “assessing the field.”

“I’m still assessing the field because I still know it’s still going to change, the lineup,” Palin noted, and told Hannity that she was still “praying about it” and “looking for others who are ready go rogue” within the Republican Party. Asked whether she was happy to listen to any candidate in particular– say, Rep. Michele Bachmann or Newt Gingrich— Palin gave her famous “all of them” answer, elaborating, “everyone one of us, we bring strengths and weaknesses to the table.” Moreover, Palin noted that she would like to give the candidates time to distinguish themselves, including “in their personal lives, [that they’ve] lived a personally and fiscally conservative life” (sorry, Newt).

Palin also gave listeners a peek of some pressure boiling under the surface, too. “I’m not a real fan of politicians,” said the former Alaska governor, “so I get kind of frustrated with the political process.” She was speaking in relation to the fact that the media is already focusing on the elections, and that many expect her to make a decision one way or the other soon. This may actually be the most bipartisan point Palin made tonight– that choosing a President takes a lot of “homework,” as she put it, and rushing it doesn’t actually make sense for candidates or voters.