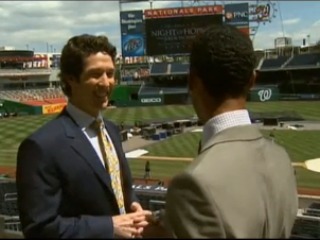 When I hear Mitt Romney say he believes that Jesus is the Son of God — that he’s the Christ, raised from the dead, that he’s his Savior, that’s good enough for me

And, as CBN News reports today, Osteen isn’t backing down from his comments:

“I’m not looking to exclude people, I’m looking to include them,” Osteen explained.

Romney’s adherence to the Church of Jesus Christ of Latter-Day Saints had been a matter of contention for some in media and politics, with Romney facing accusations that his family had fled to a Mexican commune that practiced polygamy, being given conflicting advice on whether or not to explain his faith to the American people, grappling with musings about whether his belief system makes him “weird,” dealing with criticism that his religion is “invented” or illegitimate, and, of course, facing varying levels of confusion, hesitation or outright animosity from Christians who do not consider Mormons to truly believe in and worship Christ.

Have a look at Osteen’s comments, via CBN: