Peter King Warns GOP Not To Shut Down Government: Americans ‘Turned Off By Terror Politics’ 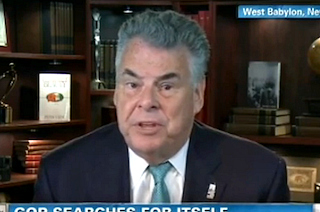 On CNN’s State of the Union Sunday morning, Congressman Peter King strongly urged certain members of the Republican Party to back away from their recent rhetoric threatening to shut down the government over either the funding of Obamacare or the extension of the debt ceiling.

“There’s no reason to be threatening to bring down the government,” King said. “Let’s make this work, let’s get the spending cuts we need. But American people get turned off with the threat of terror politics.”

King also sounded cautiously optimistic on the prospects of immigration reform in the House.

“I think we have to show good faith in trying to find legislation that works, and I think we are going in that direction,” King said. “The President had four years on immigration, and did absolutely nothing. I would say you’ve seen a lot of movement in the past six months. The Senate, with strong Republican help, a bill did pass. I don’t fully agree with that bill, but I think we can find ways to make that bill work. You do find people in the House willing to make it work.”