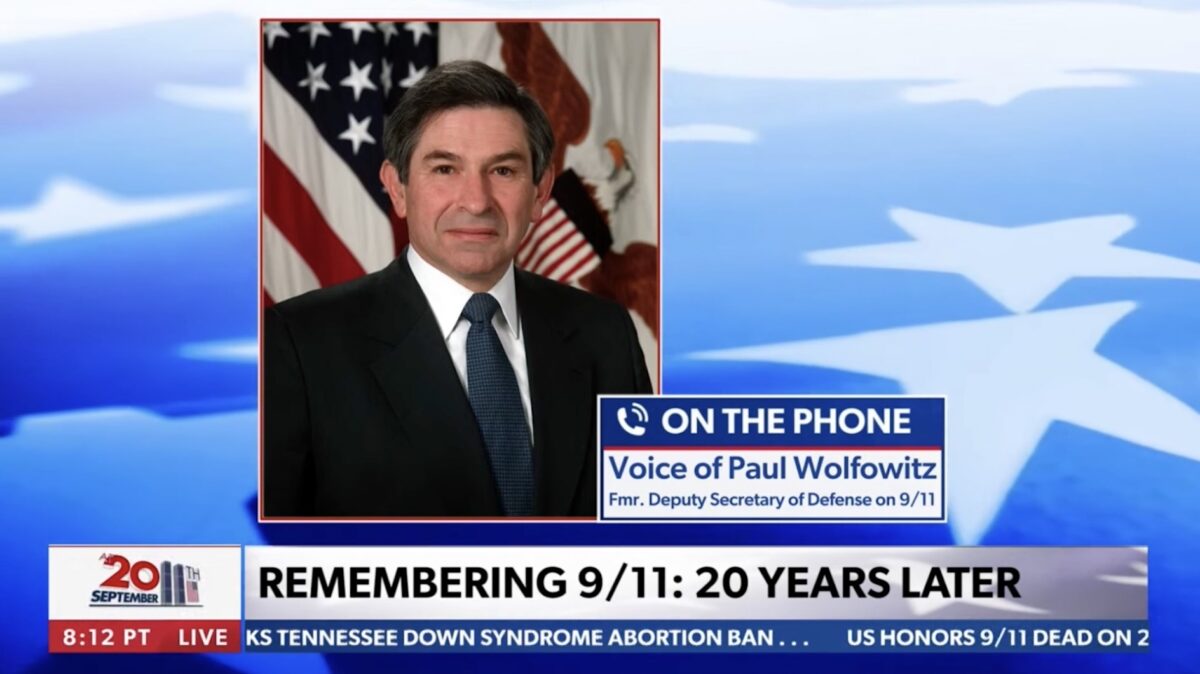 Screenshot via Newsmax (Note: it was not actually Paul Wolfowitz on the phone).

That’s exactly what happened to Newsmax, when they told their viewers they were interviewing Paul Wolfowitz, who served as Deputy Secretary of Defense for George W. Bush, being a part of the former president’s Cabinet on September 11, 2001. 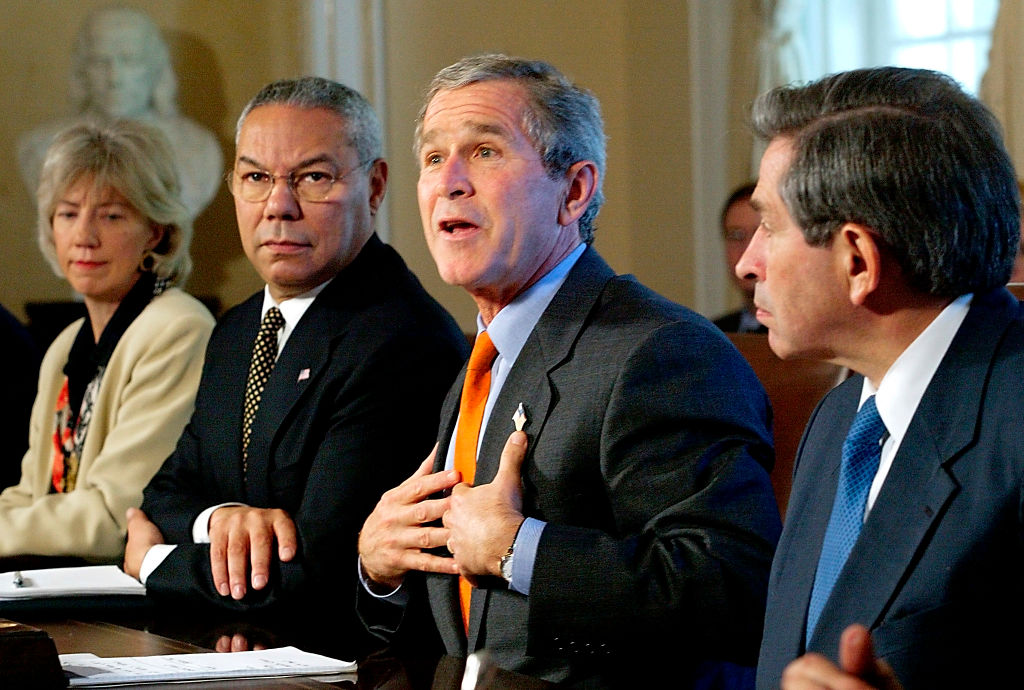 America Right Now host Tom Basile was the first to fall for the ruse set up by a group of pranksters known as The Yes Men, who, according to their website, engage in “laughtivism” in order to “destroy brands, create public illusions, work with communities, disrupt events, and impersonate nefarious entities.”

Yes Men member Andy Bichlbaum’s original plan was apparently to pretend to be a fake colleague of Wolfowitz’s from the American Enterprise Institute, a think tank where Wolfowitz is a senior fellow, for an interview scheduled on August 21.

When he logged on to chat with Basile’s producers, he offered his planned excuse that Wolfowitz was having “internet trouble” but he, as the made-up colleague, could do the interview. Instead, the producers rejected that idea “and suggested just patching Wolfowitz through on the phone.”

Bichlbaum just rolled with it, and Basile proceeded to interview him live on air for eleven minutes, even though his voice is very different from the real Wolfowitz’s:

One weird thing: Tom Basile actually knows Wolfowitz, as he mentioned during the broadcast. Andy hadn’t planned to impersonate him, so he didn’t bother listening to his voice — and we’re pretty sure he sounds nothing like him. Yet Basile never noticed.

The interview itself is absolutely bonkers. From the transcript provided by The Yes Men, Bichlbaum-aka-Fake-Wolfowitz said that the Afghanistan war was not just a waste of money, but now that President Joe Biden had ended it, ordinary Americans had very little to be proud of, without a war to fight.

“It’s very clear $2 trillion could have gone to things that Americans could now be proud of, instead of a 20-year unwinnable war,” he said, live on air. “The next time we have two trillion dollars lying around, let’s spend it on something useful like health care or education.”

Americans “can be proud of a war, even if it’s unwinnable, even if it lasts 20 years, even if it’s been a failure from day one,” he insisted. “That’s what we’ve lost and that is truly tragic, Tom.”

Basile spent the rest of the interview repeatedly trying to steer Bichlbaum back on topic as the prankster repeatedly made comments about how he hopes “the next time we have two trillion dollars lying around we do something useful with it instead” of giving the money to the “Lockheed Martins of the world.”

At no point during the interview does Basile seem to recognize that the person whom he is interviewing is absolutely positively not the former Deputy Secretary of Defense.

Needless to say, the real Paul Wolfowitz has very different views on the war in Afghanistan, not to mention he’s 77 years old and has a totally different voice than the much-younger Bichlbaum. Here is the actual, genuine Wolfowitz in a Fox Business interview that aired on Friday:

“Three Presidents in a row failed to explain that we were in #Afghanistan to protect the #US” – Former Deputy Secretary of Defense Paul Wolfowitz reflects on the #WarOnTerror EXCLUSIVELY with @gerardtbaker.

Then, on Saturday, The Yes Men managed to overshadow their own previous prank, getting Bichlbaum back live on Newsmax, again pretending to be Paul Freaking Wolfowitz.

From the Yes Men’s post about the Saturday prank, it seems that Newsmax actually contacted Bichlbaum to invite him back on their network, having no clue that he was not, in any way whatsoever, Paul Wolfowitz:

Three weeks after Newsmax’s Tom Basile allowed a fake version of his “friend” Paul Wolfowitz to talk for 11 minutes, Newsmax invited “Wolfowitz” back. This time we were determined to stop them from calling again.

Bichlbaum wasted little time once he was live on air, launching into a rant about how “new master terrorists” had arisen that made the 9/1 hijackers look like “rank amateurs.”

“I’ve got to tell you, Newsmax is a much bigger threat to America than the hijackers of 9/11,” said Bichlbaum right before they cut him off.

The Newsmax panel were all shocked by Bichlbaum’s remarks but, somehow, incredibly, still seemed to have not one darn clue that this was not actually Wolfowitz who was making these stunning comments.

Watch the clip above starting around the 1:25 mark when they drop his call; they cut him off with “thank you for your service!” and then there are multiple comments about how this was “embarrassing” and “unfortunate” from a former Deputy Secretary of Defense, on a day that was supposed to be about “unity and bringing people together.”

“He was at the Pentagon that day and you would think that he wouldn’t chose this moment to be, frankly, hateful and intolerant,” said Basile — who, again, does actually know the real Wolfowitz in real life.

Watch the video clips above, via Newsmax and Fox Business.