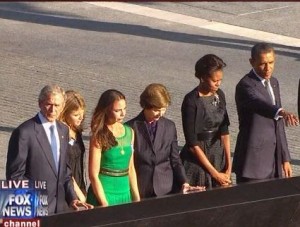 President Barack Obama and former president George W. Bush spoke at the site of the 9/11 memorial today, and both reached back into old texts to put into words their feelings on this very emotional day for the nation.

President Obama chose to read from Psalm 46, a Bible passage focused on the power of God and the nature of tragedy.

God is our refuge and strength, a very present help in trouble.

Therefore, we will not fear, even though the earth be removed, and though the mountains be carried into the midst of the sea.

Though its waters roar and be troubled, though the mountains shake with its swelling, there’s a river whose streams shall make glad the City of God, the holy place of the Tabernacle of the Most High.

God is in the midst of her.

She shall not be moved.

God shall help her just at the break of dawn.

The nations raged, the kingdoms were moved.

He uttered his voice.

The Lord of Hosts is with us.

The God of Jacob is our refuge.

Come behold the works of the Lord who has made desolations in the Earth.

He makes wars cease to the ends of the Earth.

He breaks the bough and cuts the spear in two.

He burns the chariot in fire.

Be still and know that I am God.

I will be exalted among the nations.

I will be exalted in the Earths.

The Lord of Hosts is with us.

The God of Jacob is our refuge.

Meanwhile, George Bush (to a round of applause from the crowd) read a letter Abraham Lincoln sent to a mother those sons died during the Civil War.

I have been shown in the files of the War Department a statement of the Adjutant General of Massachusetts that you are the mother of five sons who have died gloriously on the field of battle. I feel how weak and fruitless must be any word of mine which should attempt to beguile you from the grief of a loss so overwhelming.

But I cannot refrain from tendering you the consolation that may be found in the thanks of the Republic they died to save. I pray that our Heavenly Father may assuage the anguish of your bereavement, and leave you only the cherished memory of the loved and lost, and the solemn pride that must be yours to have laid so costly a sacrifice upon the altar of freedom.

Yours, very sincerely and respectfully,

Watch the video of their remarks below, courtesy of MSNBC: