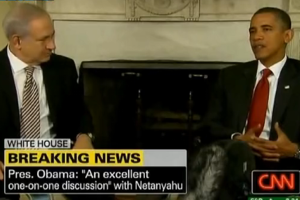 President Barack Obama met with Israeli Prime Minister Benjamin Netanyahu today to discuss negotiations with the Palestinians, combating terrorism and the threat of a nuclear Iran. It was their first face-to-face meeting since the Israeli military’s controversial interception of a flotilla directed toward the Gaza region, as Netanyahu canceled his early June trip in light of the events. Both leaders seemed pleased with the outcome of their discussion.

President Obama reaffirmed that the discussion was positive, although both leaders wished to send a message that “this isnt more talk and more process without action.” He called the US’s latest sanctions on Iran “as robust as any that we have ever seen” and expressed optimism in dealing with that issue, though was more reserved on the question of Gaza:

“[The goal is] two states, living side by side in peace and security. Israel security needs met, Palestinians having a sovereign state they call their own… it’s going to be difficult, it’s going to be hard work… [but Netanyahu] reaffirmed his willingness to engage in serious negotiations with the Palestinians.”

On his part, Netanyahu praised the “extensive, excellent discussion” and noted that “the greatest new threat on the horizon, the single most dominating issue for many of us is the prospect that Iran acquires nuclear weapons.” He assured the President and the press that “Israelis are prepared to do a lot to get peace in place,” but that “we don’t want a repeat of a situation where we vacate territories and those are overtaken by Iran’s proxies and used as launching ground for terrorist attacks or rocket attacks.”

Video of their press talk below: