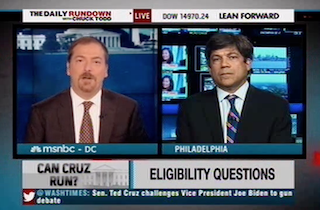 “Another birther controversy could be brewing for 2016,” MSNBC host Chuck Todd informed on Monday. Though this time aimed at a Republican: Sen. Ted Cruz (R-TX), who was born in Canada. While Cruz likely doesn’t face any real eligibility problems, Todd acknowledged, “questions are being asked.”

Todd noted that Cruz’s birth could pose a “potential problem” should the senator decide to pursue a presidential bid — and that the issue is largely a matter of semantics. How exactly is “natural-born citizen” defined? Since Cruz’s mother was born in the U.S. and his father became a citizen in 2005, Todd explained, going on to list similar scrutiny faced by President Obama, George Romney, and John McCain.

“The legal evidence seems to side with Cruz,” Todd argued, “but there is a grey area, and that may be all his opponents need.”

“It’s pretty clear that he qualifies as natural born,” Peter Spiro, a professor at Temple University, stated in response to Todd’s earlier question about how the term is defined. To clarify, Todd summed up: “If you are born to U.S. citizens abroad, no matter where, if they are U.S. citizens, if…one of your parents is a U.S. citizen — then that should qualify as natural born.”

Again revisiting previous candidates’ scrutiny, Todd questioned whether we need “legal clarity” on the matter whether Congress needs to step in. But Spiro said we’ve been developing a consensus in “an organic way” that doesn’t necessitate that the courts intervene. Because the courts have avoided it, he added, the door will always remain slightly ajar for political opponents who want to use issue as a point of contention.

Todd chimed that somebody will file a lawsuit, but Spiro maintained “the courts won’t touch this with a 10-foot pole.”