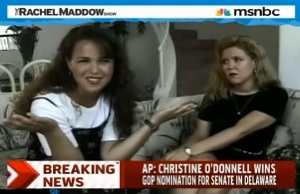 Tea Party (and Sarah Palin)-backed candidate Christine O’Donnell shocked many by winning the GOP Senate primary in Delaware tonight, enraging a good part of her own party in the process. Why are they so beside themselves at O’Donnell’s win? Well, the video Rachel Maddow gleefully showed tonight while discussing O’Donnell’s victory is a good place to start.