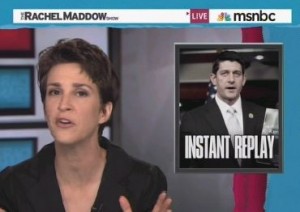 Tonight Rachel Maddow continued hammering Congressman Paul Ryan for acting as though the 2012 election never happened and continuing to push his budget proposal through Congress. She expanded to take on the entire Republican party at large for revisiting discredited ideas from the 2012 election like how Obama wants to gut welfare work requirements and Ryan’s own budget. Maddow slammed the GOP for being stuck on these 2012 campaign “lies” and not accepting that they were ever discredited.

Maddow mocked Ryan standing firm in the not-so-distant past by comparing it to the film Groundhog Day. She reminded viewers that during the 2012 election, President Obama was criticized for gutting welfare when it was Republican governors asking for leniency in welfare work programs, with the Mitt Romney campaign tacking onto the “lie” with two separate ads. She said this was one of the most brazenly obvious lies of the campaign, and yet, despite this, it’s back in the news.

Maddow pointed out how Republicans in the House passed a bill attempting to block welfare waivers, meaning that they “voted to block this thing that never existed.” She highlighted another 2012 campaign lie, namely that the Republicans went after Obama giving free stuff to voters, in particular the now-viral video of a black woman saying minorities are getting phones from the president.

And despite the fact that the phones were the result of a program started under Ronald Reagan, the GOP is revisiting this same fight, with Maddow highlighting attempts this week to end the program. She remarked that this lie and the welfare lie must be back because “apparently, they were too much fun to leave in the last year.”

Which brought Maddow to the Ryan budget. She stated, just as she did Tuesday night, that Ryan is dredging out the same budget that he pushed on the campaign trail last year, tying it into this overall theme of the Republican party not letting go of the 2012 race.

“All of this stuff, the welfare lie, the Obamaphone lie, the ‘kill Medicare budget that we don’t have to explain, trust us’ – it’s Republicans trying to get traction on stuff that they did not get traction on before, when they were busy trying not to lose in the November elections, and they lost anyway.”

Maddow ended by asking if it is going to become the new normal in Washington for the same dismissed ideas to be constantly brought up and fought upon as if they were never disproven.