‘Rapper-in-Chief’: Fox Contributor Piles on Obama’s Use of ‘N-Word’ 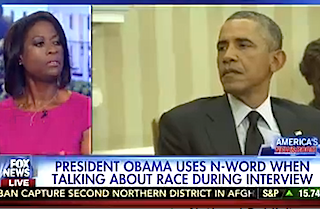 Following the heavily critical coverage on Fox & Friends, Fox News continued to challenge President Barack Obama’s use of the “n-word” during the WTF podcast Monday morning, this time with the help of conservative contributor Deneen Borelli, who dubbed the president “rapper-in-chief.”

After once again playing the clip of Obama telling Marc Maron that racism in America has not been cured, “and it’s not just a matter of it not being polite to say ‘nigger’ in public,” anchor Bill Hemmer sighed, uttered, “Wow, that has a lot of people talking” and asked his guests if the president was being “too blunt.”

“He has really dragged in the gutter-speak of rap music,” Borelli said. “So now he’s the first President of rap, of street? I mean, come on, he has lowered the stature of the high office of the president of the United States.” Borelli, who herself is African-American, went to accuse Obama of using the “insane, crazy comment” as a “grand distraction to take away from the people uniting.”

“The president-in-chief, the rapper-in-chief now, is now further dividing our country,” Borelli continued. “I find it outrageous.”

On the other side of the argument, Basil Smikle, Jr. urged Borelli to look at the context in which the word was used and not just the fact that Obama used it. “It is acceptable because he is making the point you shouldn’t use the word,” he said. And let’s make sure to put this in context. He was talking about hate, he was talking about the history of this country and it’s the racism that existed here. And in making that point, if it is cringe-worthy to hear it, then clearly the point is hitting home that you shouldn’t say it no matter who you are.”

“As a white American, my entire life I know that that is an electric word and you stay away from it,” Hemmer chimed in, also invoking rap music. “This is something we thought was entirely off limits, and now you have the president using it.”

As Hemmer and Borelli bolstered each other’s assessments on the supposed transgression, Smikle was forced to remind them, “He didn’t call anybody the ‘n-word!'”