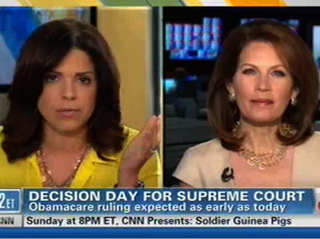 As the nation awaits the Supreme Court’s ruling on President Obama‘s Affordable Care Act (aka Obamacare, close relative of Romneycare), Rep. Michele Bachmann (R-MN) appeared on CNN’s Starting Point to expand on candidate Mitt Romney‘s limited plans to replace the law after he repeals it. Romney is essentially offering nothing, but calling it something. Bachmann offered up a two-point plan that involves gutting state insurance regulations, and making it easier for doctors to kill you.

In addition to rehashing the arguments against the Affordable Care Act’s individual mandate, and talking past host Soledad O’Brien‘s poll that showed most Americans favor health care reform that goes further than Obamacare, Rep. Bachmann proposed replacing the “unpopular” law (so unpopular that 58% of Americans oppose repealing it) with two specific legislative actions: “letting every American buy any insurance policy they want anywhere in the United States of America,” and “medical malpractice reform.”

Good on Soledad for pushing back against Bachmann’s misguided implication that progressive reform is unpopular with Americans, but without being an expert on health insurance, it’s tough for any interviewer to harpoon the bloated BS that Republicans float on the subject. That first idea, “allowing Americans to buy insurance across state lines,” sounds all happy and good to the average person, but what it actually means is gutting almost every state insurance regulation in the country.

Some of you are thinking “Aren’t regulations just a tangled morass of red tape designed to bedevil job creators?”

When it comes to health insurance, though, that tangled morass protects you from insurance company practices like rescission. That’s when an insurance company finds out that you, who have paid your premiums for years, have suddenly gotten expensively sick (or pregnant), and go back to look at your initial application for insurance, to see if they can find any error at all. If they find one (and even if they don’t), they rescind your policy retroactively, and even try to recover whatever they paid on claims before you got sick.

Make no mistake about it, left to their own devices, insurance companies will take your money, then look for any excuse they can not to pay for your care, and insurance regulations are just about your only protection against that. In Bachmann/Romney America, you’ll be at the mercy of whichever state bends over hardest to attract insurance companies.

Part two of Rep. Bachmann’s plan involves “medical malpractice reform,” which, to Republicans, means limiting the amount of money you can sue for if a doctor kills or maims you, your children, or your spouse. The CBO estimates this will save about $5.4 billion a year (much less than the CBO’s estimate of deficit reduction under Obamacare), but they don’t calculate the number of people who will be killed, or extra testicles cut off and discarded, if doctors don’t have to worry about their malpractice insurance going up. In a way, they already don’t have to worry about it, since bad doctors are currently charged the same rates as good ones. Imagine if auto insurers charged you the same amount as the town drunk, then limited the amount you could sue that drunk for when he kills your kids. That’s the Bachmann/Romney plan.

Finally, there’s Mitt Romney’s plan to replace Obamacare’s extremely popular preexisting conditions clause with…nothing. He says that “If people have been continuously insured, and then they decide to change jobs or change locations, they should not be denied coverage if they go to a new place or have to get a new policy.”

If the Supreme Court strikes down only the individual mandate, it will be a short-term political loss for the President, but by leaving the more popular provisions in place, they would virtually guarantee the passage of some kind of Medicare for all scheme, or insurance companies would just go broke insuring nothing but sick people. However, if the entire ACA is struck down, or most of it, Rep. Bachmann just gave you a preview of what’s coming.