Rep. Cleaver Reveals Ingredients Of ‘Satan Sandwich’ And Why His GOP Colleagues Are Not ‘Satan’ 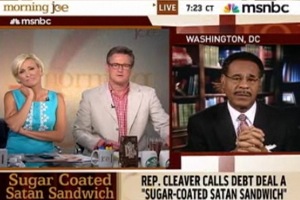 Democratic Congressman and chairman of the Congressional Black Caucus Emanuel Cleaver appeared on Morning Joe and continued talk of how the debt deal was a “Satan Sandwich.” Although since Joe Scarborough and Mika Brzezinski found the description humorous, Cleaver took a light-hearted moment to explain the ingredients of the sandwich, while adding that it will be served with a “demon drink.”

Cleaver’s description of what’s in a “Satan Sandwich” was a bit awkward as he straddled between seriously addressing flaws in the bill and being comical:

“You’ve got a little bit of sourdough on one side of the sandwich for poor people. And then you have some onions for people who are on unemployment benefits and realize that’s not going to be in the deal. It’s got a lot of stuff in it . . . very few things that are good and you serve it with, of course, a demon drink.”

Cleaver became more confident addressing the one ingredient missing, not just from the sandwich, but from Washington in general: “we don’t have a level of civility in Congress” to really solve big problems. “I’ll talk about a Satan sandwich, but I’ll not call another member of Congress Satan,” Cleaver stated while highlighting the fact that many of his colleagues use vitriolic language against their political opponents, while he actually shows respect to them all.

Scarborough agreed that Cleaver can talk about bills being satanic, but otherwise “let’s just not make it personal.” Yet Cleaver feared the public and the media actually reward the politicians who use the most hateful language since “the public actually votes to send people to Washington after having heard them campaign in some of the most nasty ways possible.” And then the nastiness is rewarded with more media coverage and additional campaign donations. Although the lesson most readily learned from Cleaver seems to be that if you come up with something as exciting and creative as “Satan Sandwich,” then that is truly the best way to get yourself attention.