Rep. Joe Walsh Is Skipping Speech Because Obama’s ‘Cheapened The Very Notion Of A Joint Session Of Congress’ 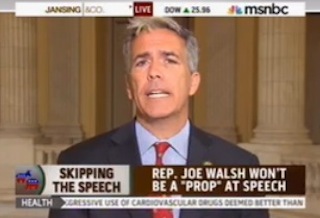 The country’s in a bit of a spot economically. Fortunately, our leaders in Washington have very clear plans. Our President’s plan seems to involve talking a whole lot while the opposing party plans on sticking their fingers in their ear and yelling “NANANANANA!” really loudly. One of the nanana’ers, Rep. Joe Walsh, dropped by Jansing & Co. this morning to explain why he wouldn’t be attending President Obama’s jobs plan speech to Congress tonight. Unsurprisingly, he and Chris Jansing didn’t see eye to eye.

Like Sen. Jim DeMint, Walsh argues that Obama’s speech will be political, saying that he doesn’t want to be a prop. He also argued that Obama has too many speeches, saying that the President has “cheapened the very notion of a joint session of Congress” and that he gives a speech every time “someone skins their knee.”

It’s true. It was a real bummer when all those folks in Tucson skinned their knees, huh?

Meanwhile, Jansing took the whole “respect for the office of the President” track, also pointing out that Walsh’s plan to talk to “job creators” tonight instead was maybe a bit hypocritical since he was a vocal critic of Obama doing just that during his bus tour. However, she wasn’t anywhere near as harsh as Jansing & Co. guest Marc Morial who called Walsh’s performance “disgusting,” a comment that was totally uncalled for.

I mean, give the guy a break. He’s busy tonight. He’s clearly been invited to the same super cool party the NASCAR guys are at.