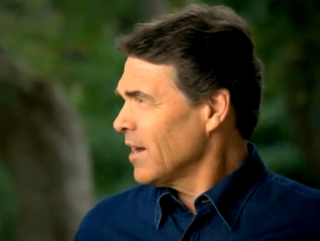 Rick Perry parachuted himself into the 2012 Republican race as a frontrunner, but rather than taking the campaign season by storm, his need to consistently deliver lines without flubbing them has put him in a bit of a vulnerable position. In his new “campaign ad” for The Tonight Show, he takes a shot at himself by citing his now-legendary brain freeze over the three federal agencies he would shut down, and in making light of himself, Perry is at his most charming.

The “ad” actually begins with a clip of the gaffe, cutting it off well before the extended pause where Perry fumbles and fails to find an answer, as Perry interrupts himself to answer the question. “We’ve all lost our train of thought before, but not many have done it on national TV,” he jokes, adding “if you want a slick debater, I’m obviously not your guy” and outlining some of the policies he wants to see implemented under his watch, including a balanced budget amendment and a “part-time Congress.” Naturally, he forgets his last (Congressionally mandated) line: “I’m Rick Perry and I approve this message.”

Perry has been trying to scramble to the top again since that gaffe by making light of it repeatedly– most notably on The Late Show in Dave Letterman‘s Top Ten list– and by performing significantly better in the debates following the gaffe. While neither seem to have particularly helped him, that could be attributed far more accurately to the fact that the media has simply not given him the time of day; they’ve had enough on their plate with the odyssey of Herman Cain and the unexpected and pretty inexplicable rise of Newt Gingrich.

The most intelligent strategy for any candidate in the race, however, is to run against the default: Mitt Romney. Gingrich is the exception, as he has made his run one against President Obama and the media and succeeded in part, but whether that is a successful long-term strategy given the ticking time bomb nature of his resumé is yet to be determined. Romney’s greatest weakness is not that many allege he has been on both sides of every issue (that hasn’t stopped Gingrich), or that he is Mormon (religion hasn’t stopped Jon Huntsman, though other things have), or that he is an elite businessman (as Cain is). His greatest weakness is that nobody likes him, because he comes off as stiff and robotic, with little charisma or empathy.

In wielding his faults as a spear in the campaign battle, Perry positions himself to be the diametric opposite of Romney– what could be more of an empathetic experience than blanking out on the answers in the middle of the test? What is more charismatic than having the confidence to make fun of yourself, particularly in contrast with a Republican who thinks Fox News is too difficult an interview venue? The jokes serve to argue that the American people have seen the worst of Rick Perry, that he has publicly hit rock bottom. And in this sort of campaign, when it’s unclear if the number of women alleging sexual misconduct with Herman Cain will remain in the single digits and just how many lobbying gigs Gingrich took after being unceremoniously displaced in Congress, knowing the worst of a candidate is in the past is a surprisingly formidable weapon.