Rielle Hunter Alleges She Was Not John Edwards’ Only Mistress 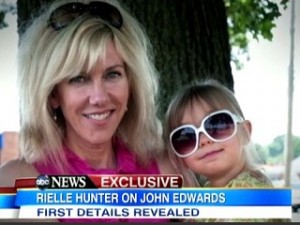 Actress and film producer Rielle Hunter was not John Edwards’s only mistress, according to Hunter herself.

In an exclusive interview on ABC’s 20/20 set to air this Friday, Hunter reveals that the former North Carolina Senator claimed to be involved with multiple women. Edwards reportedly confessed to having mistresses in Chicago, Los Angeles and Florida the night he began his affair with Hunter. He later retracted the statement, admitting to Hunter that he fabricated the three women so that she and past mistresses would not grow too attached.

“[I] beat myself up with mean thoughts followed by awful feelings,” recounts Hunter after realizing that Edwards had lied to her throughout the duration of their relationship.

The tell-all interview will air four days before the release of “What Really Happened,” Hunter’s memoir that documents the affair. The film producer claims to have written the book in order for her daughter with Edwards, Quinn, to “have one entirely truthful account of how she came into the world.”

“After all,” Hunter added. “This is her story too.”

The book also depicts Edwards’s former wife, Elizabeth Edwards, as a “witch on wheels,” countering the latter’s “[saintly]” public image as a health care activist. Hunter believes that Edwards’s wife drove him to seek affairs with other women because of how “crazy” she was.

But for the most part, Hunter’s memoir details how the couple managed to keep their relationship secret, how they dealt with the paparazzi and their relations after the birth of their daughter Quinn. At the end of the day, Hunter insists that Edwards is a caring father though the future of their relationship remains foggy.

Hunter’s revelation follows Edwards’s recent acquittal on fraud charges, which involved accusations that Edwards had used campaign donations to hide his affair with Hunter back in 2008.