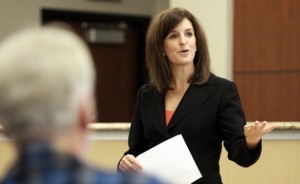 Michigan State Rep. Lisa Brown made headlines last week when she was banned from speaking on the floor of the Michigan House following her remarks that she was “flattered that you’re all so interested in my vagina, but ‘no’ means ‘no.’”

The Democratic lawmaker has cannily decided to wring out some more media attention by reciting The Vagina Monologues on the steps of the Capitol in Lansing, MI, on Monday, where she’ll be joined by Vagina Monologues author Eve Ensler.

Rep. Brown has successfully promoted the media narrative that she was banned from speaking about a bill that would restrict women’s reproductive rights because she used the word “vagina,” which echoes other notably man-tastic moments in the Republicans’ so-called “War on Women,” such as the all-male witness panel at a congressional hearing on contraception. While her framing gets absurdity points, it obscures the real reason she was banned. Based on statements from the Republican leadership of the House, it seems they were more offended by her use of the phrase “No means no,” a fairly explicit comparison of their bill with sexual assault.

That’s unfortunate, because no matter how you feel about the accusation, it’s the one that Republicans ought to be defending themselves against, and not the more humorous, but less relevant, notion that they’re uptight about vaginae. Rep. Brown’s Vagina Monologues stunt carries the benefit of keeping the conversation going, but will it be the right conversation?

Similarly, the “War on Women” frame has been very successful in energizing women’s rights voters, but fails to take into account that there are women on both sides of these issues, and therefore fails to rebut the women who support curtailing women’s rights, and women’s access to health care. A far more accurate title would be “The War On Those Women,” because it would bring into focus the fundamental division in this debate, and help folks in the middle decide which side they’re on.

For example, when Rush Limbaugh calls women who use birth control “sluts,” conservative men and women can reason that he’s not talking about all women, just the ones who want the law to treat them equally when it comes to what is covered by the insurance they pay for. Women (and/or their marriage partners) who are privileged enough to be able to pay for insurance and pay for birth control might not value that right, especially if it means throwing in with a party that they feel threatens their privileged status. They also may be operating under the widely-disseminated lie that Fluke was lobbying for “free” contraception that “someone else” would have to pay for, rather than to have contraception covered under the insurance she paid for herself.

There are also an awful lot of women who oppose abortion, and don’t consider themselves “anti-woman,” because they actually are offering women a choice; it’s just their own choice, enforced on others. The women choosing to have abortions are always some other set of women, until it’s not.

Re-christening the Republicans’ crusade as “The War On Those Women” more accurately reflects the conflict at the heart of these issues, that Republican politics are about protecting privileges, not rights.