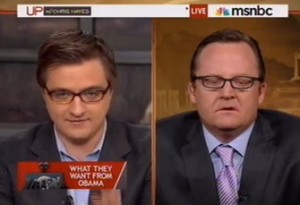 MSNBC’s decision to hire former top Obama advisers Robert Gibbs and David Axelrod has resulted in more pearl-clutching than a Polaner All-Fruit audition, but the network’s treatment of Gibbs, thus far, belies the most common criticism. While the Lean Forward network’s detractors try to pose the hirings as evidence that they’re “worse than Fox News,” and that Gibbs and Axelrod won’t be “independent” enough, Gibbs has dispelled that notion in short order by volunteering a major admission about the Obama administration’s drone program, and MSNBC’s anchors have responded by pressing him on it.

Much of the fretting about Gibbs and Axelrod is just stupid on its face. MSNBC devotes an enormous amount of airtime to Republican political hacks, and features three hours of Republican-led programming every day. Every cable network employs partisan political advisers, the only difference being that Gibbs and Axelrod were winners. To the extent that any of these people have valuable insights, it stands to reason that the winning team’s insights would be more valuable, not less.

The “fear” that Gibbs and Axelrod won’t be “independent” is also silly, and an easy criticism to make. Obviously, these two share many of the same beliefs as the President, so there will naturally be considerable overlap, which critics can then use as confirmation of their pre-determined narrative. For example, Robert Gibbs got the scare-quoted “independent” treatment from Mediaite resident conservative Noah Rothman today for offering his analysis of the GOP’s sequester messaging. “The problem, again, from the Republican standpoint with their message – and you mentioned this poll – is, you’ve got Republicans that say, ‘these [cuts] will hurt the economy, they will hurt our military readiness, and they should go through,’” Gibbs said.

That does sound an awful lot like this recent bit of messaging from the White House:

The effect of Boehner’s argument is to make Obama seem reasonable in comparison. After all, the president certainly agrees with Boehner that the sequester cuts threaten national security and jobs. The difference is that Obama wants to avoid them. At the same time, Boehner is contributing to Republican confusion on the question of whether the cuts are in fact “deep” or whether they are relatively minor.

Could the GOP message on the sequester be any more self-defeating?

That assessment, considerably less generous than Gibbs’, wasn’t made by some White House spokesman, it was from conservative columnist and Fox News contributor Byron York. Is Gibbs now in the tank for Rupert Murdoch? If we can look forward to this kind of watch-dogging every time Gibbs’ analysis roughly lines up with the President’s, I’m going to need to see all the complaints about Dan Senor shilling for Mitt Romney* every morning during the 2012 election.

Beyond the inherent flaws in these criticisms, Gibbs’s performance has already proven he’s not stuck on the Obama reservation, nor is MSNBC. On Sunday’s edition of Up with Chris Hayes, Gibbs revealed that he was told, in preparation for his job as White House press secretary, not to acknowledge the existence of the drone program. The revelation (of something we all knew, but which hadn’t been said out loud) made big news, but it’s worth noting that this nugget wasn’t dragged out of him. Regardless of his analytical bent, Gibbs has more value than your average political commentator because he knows things, and what he knows is news.

That’s an inconvenient fact for those who would pose MSNBC as “a bona fide organ of state propaganda,” because rather than spin or ignore Gibbs’ admission, MSNBC’s hosts pressed him on it.

The agita over the Gibbs/Axelrod hiring is a winner’s tax in more ways than one, however. It isn’t just conservatives who have an interest in undermining MSNBC, or in posing them as somehow equivalent to Fox News. Fox News isn’t likely to woo any MSNBC viewers based on such criticism, but CNN, long contemptuous of POV journalism, has a vested interest in being seen as the only legitimate cable news destination, and their Howard Kurtz has sounded the alarm loudest of all. Unfortunately, the facts don’t bear that criticism out so far.