Robert Gibbs To Russian Reporter: No, Arizona Shooting Is Not “American” 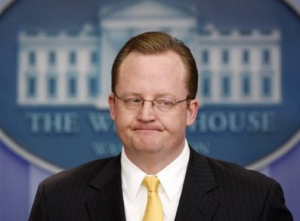 White House spokesperson Robert Gibbs, speaking about this weekend’s shooting in Arizona, responded to one Russian reporter’s assertion that the shooting was somehow “American” – as in a wholly American demonstration of one practicing his freedom to… kill… people? We’re not entirely sure what the reporter’s thought process was.

In any case, here is how he phrased his question to Gibbs:

This is America, the democracy, the freedom of speech, the freedom of assembly, the freedom to petition your government. And many people outside would also say — and the quote, unquote ‘freedom’ of a deranged mind to react in a violent way is also American. How do you respond to that?

Gibbs asked the reporter to repeat “that last part” before issuing a very clear, concise response:

No, no, I would disagree vehemently with that. There are — there is nothing in the values of our country, there’s nothing on the many laws on our books that would provide for somebody to impugn and impede on the very freedoms that you began with by exercising the actions that that individual took on that day. That is not American.

There are — I think there’s agreement on all sides of the political spectrum: Violence is never, ever acceptable. We had people that died. We had people whose lives will be changed forever because of the deranged actions of a madman. Those are not American. Those are not in keeping with the important bedrock values by which this country was founded and by which its citizens live each and every day of their lives in hopes of something better for those that are here.

We hope that clears things up!