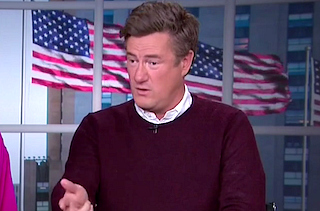 On Thursday morning, Joe Scarborough and a Morning Joe panel mulled why conservative Republicans were ganging up on Chris Christie following his dominant reelection as governor of New Jersey, favorably contrasting Christie’s style against that of Ted Cruz and the “47% Republicans.”

“I don’t hear Ted Cruz talking about the real lives of the real people,” former Clinton press secretary Dee Dee Myers said. “One of Christie’s great strengths is, he brings the focus back to the real life of the real people in his state, and not leaving anybody behind, and we’re in the fight for every single New Jerseyian. That’s how you win elections. You get the focus off of ideology, and get the focus off fighting with the other side, and you bring it back to the people. I think Christie does it brilliantly. Reagan did it brilliantly. Clinton still does it brilliantly.”

“One of Ronald Reagan’s greatest lines against Jimmy Carter was, ‘A recession is when your neighbor loses their job, a depression is when you lose your job,'” Scarborough said. “Ronald Reagan understood something that all of the Republican nominees that ran after him didn’t. He understood what it was like to have a dad who was unemployed, to move from town to town, to go to Eureka College…He was a son of the working class. After that you had a patrician in ’88 and ’92. Then Bob Dole. In 2000, you had another Bush. 2004, another Bush. 2008, you had a guy whose dad helped run the Navy. In 2012, you had a guy whose dad ran a state and car company.”

“I remember another Republican [in college] saying, ‘Oh, anybody that wants a job can get a job,'” Scarborough recalled. “I almost got up and punched the guy. Are you kidding me? I think that’s the difference between the 47% Republicans and the Chris Christie Republicans.”