Scarborough Goes off on NY Times for Running Christie Story over IRS: ‘This Is a Scam’
VIDEO

Scarborough Goes off on NY Times for Running Christie Story over IRS: ‘This Is a Scam’ 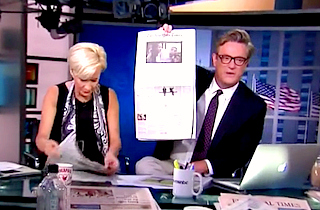 Morning Joe host Joe Scarborough lit into the New York Times Tuesday morning for running a front page story about a possible second Chris Christie bridge scandal when he felt the IRS investigation was a far more pressing issue, calling the Times’ news priorities a “scam” and alleging that it was indicative of why conservatives don’t trust national news outlets.

“Is it possible that the New York Times and Washington Post are not putting on the front page of their newspapers the fact that an internal investigation has been launched against the IRS on the most shady behavior, and yet they put the Pulaski sky bridge whatever on page A-1?” Scarborough asked. “This is garbage.”

“This really is a scam,” Scarborough continued. “This is why conservatives don’t trust national newspapers. It’s why they don’t trust broadcast news. There’s a double standard and you can see it on every broadcast. You can see it on the front page of every major newspaper. This is why we don’t trust the national news outlets, because they are so biased and slanted. It’s not the news that they run, even though this is a joke of a story to put on the front page here. It’s the stories they don’t run. It’s the omissions, the acts of omissions when Democrats are in power. It’s stunning.”

Former Bush administration official Nicolle Wallace found the IRS story on page A19 of the Times.