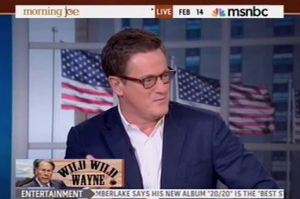 The National Rifle Association’s Wayne LaPierre is out with an op-ed in The Daily Caller — and Joe Scarborough minced no words when expressing his dislike for it during this morning’s show. Hitting LaPierre for “racial overtones,” the Morning Joe host went on to call out the “shameful” GOP for “blindly” following him.

In the op-ed, entitled “Stand and Fight,” LaPierre wrote, in part:

After Hurricane Sandy, we saw the hellish world that the gun prohibitionists see as their utopia. Looters ran wild in south Brooklyn. There was no food, water or electricity. And if you wanted to walk several miles to get supplies, you better get back before dark, or you might not get home at all.
[…]
Hurricanes. Tornadoes. Riots. Terrorists. Gangs. Lone criminals. These are perils we are sure to face—not just maybe. It’s not paranoia to buy a gun. It’s survival. It’s responsible behavior, and it’s time we encourage law-abiding Americans to do just that.

“This is so laced with racial overtones,” he remarked incredulously.

“The Republican Party, if they were smart, their leaders today would condemn it, but they’re not smart. They’re scared. And you know, they keep running squared, they’re going to lose more votes. They’re going to get hammered in future elections if they allow this clown to continue to lead them around by their nose. They’re shameful. They need to be leaders.”

The keyword is “clown,” Mike Barnicle chimed in, adding that LaPierre “performs from a platform of fear.” The pair agreed that this has nothing to do with the Second Amendment and everything to do with money.

Scarborough cited survivalism — LaPierre’s “post-apocalyptic vision” — comparing him to Glenn Beck. “Why,” he asked, “does Wayne LaPierre not believe in America’s greatness?”

But back to the GOP. Given that the party is trying to gain ground with Hispanic voters, Scarborough questioned why they’re “blindly following” LaPierre, whose latest op-ed is “racially tinged” and “very suggestive.”

Speak out against him, he said. Walk away from him.