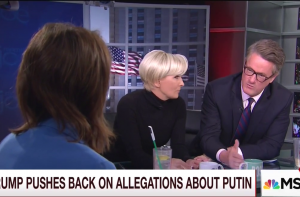 A Morning Joe interview with The Nation editor Katrina vanden Heuvel was completely derailed Monday morning after she refused to say whether or not she believed that Russian President Vladimir Putin is not murdering journalists and dissidents.

The interview got off to a rocky start right away, as Vanden Heuvel began criticizing the show for covering Donald Trump too much. “Don’t even try that Katrina!” host Joe Scarborough said. “I’m trying to ask a serious question. This happens all the time; we ask questions and people come back to Trump.”

After a solid two and a half minutes of bickering about whether or not “the corporate media system” spends too much time on Trump, they finally moved on to the topic of Putin’s treatment of journalists. But that proved just as contentious when Vanden Heuvel refused several times to say whether or not Putin was responsible for killing journalists.

Vanden Heuvel said she had many friends in the Russian media world. “They do not believe Putin ordered the assassinations. They do believe he created the climate–”

“I think it is vital for U.S. national security interests to have a relationship with Russia,” she said.

“I need to you answer the question,” Scarborough insisted. “Is Donald Trump right and am I wrong when I say Vladimir Putin was responsible for the killing of journalists?”

“I think you’re trying to do a false equivalence. I will not equate my views with Donald Trump,” she responded.

“No, I’m not!” Scarborough said, getting increasingly angrier. “I’m trying to get you to answer the question. Is Vladimir Putin responsible for the killing of journalists? That’s all I want! This isn’t a trick question.”

“Many Western scholars have many different views of Vladimir Putin…” Vanden Heuvel said. “I’m going to cite my Russian friend… who has lived and suffered, worked with journalists who have been assassinated… he does not believe that Putin ordered the assassinations, he believes Putin created the climate,” she said.

“I’m not going to agree with Donald Trump,” she said, after Scarborough again asked the same question.

Vanden Heuvel responded by saying that the U.S. needed to end the “cold war” with Russia and work together to defeat ISIS. “A lot of people at home right now are saying, ‘She’s not answering the question,'” Scarborough predicted.