Scarborough Takes On Brzezinski Over NSA: ‘Much Ado About Nothing’ When ‘Self-Righteous’ Obama Does It 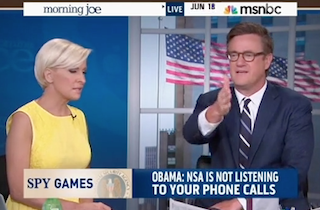 As Tuesday’s Morning Joe roundtable sought to discuss President Obama‘s defense of NSA surveillance during his interview with Charlie Rose, Joe Scarborough grew frustrated — both with his co-host Mika Brzezinski as well as the left’s response to the story. Candidate Obama was so “self-righteous” about Bush-era surveillance, he reminded.

Brzezinski noted that we appear to be debated whether we’ve been spied on and our emails have been read, but that doesn’t seem to be the case. It’s been “overstated,” Mark Halperin agreed. Scarborough sat listening for a few minutes, and eventually couldn’t help jumping in.

“Do you really want to hear what the guy who was talking yesterday about the program said in 2007 and 2008?” he asked. “I can’t just sit here and keep hearing you say this program is not as bad as we thought it was.”

As Brzezinski contested his characterization of her remarks, he pressed, “Liberals were saying for years how evil George Bush and Dick Cheney were. Now that Barack Obama is doing it, a lot are saying and you seem to be saying, much ado about nothing.”

Most people “want it done,” she countered, repeating that personal conversations are not being read and listened to. Obama was “so self-righteous,” “so above it all,” Scarborough argued. He had “such contempt” for what Bush was doing.

As he kept going, Eugene Robinson pushed back a bit by asserting that many have been surprised and appalled by the scope of these programs. It’s “not true that everybody on the left has just rolled over and said, it’s okay if Obama is doing it.” Not to mention, he added, there’s a difference between Bush and Obama: warrants.

“I understand the hypocrisy you talk about and I’m probably guilty of it,” Brzezinski conceded, “so I don’t want to start a fight here.”