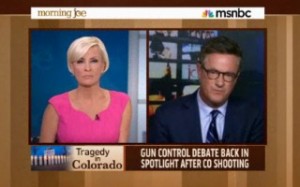 According to the Nielsen ratings, almost half a million Morning Joe viewers heard Joe Scarborough say that killers like Aurora mass shooter James Holmes are “somewhere, I believe, on the autism scale,” and that while he didn’t know if this was true of Holmes specifically, “it happens more often than not.”

Despite vocal protests from the autism community, Scarborough has refused to issue an on-air retraction, and his words have already infected at least one autistic person’s circle of acquaintances.

Last week, Joe Scarborough answered pleas and petitions from autism advocates that he correct the false statements he made about autism by telling them that they had all simply missed the point. According to autism advocate Karla Fisher (who is on the autism spectrum, as well), members of the football team she manages got Scarborough’s point, loud and clear. Fisher, who is the General Manager of the Portland Fighting Fillies professional women’s football team, writes on her Facebook page:

This weekend I hosted my football team at my farm for a camp out. They asked me questions about my autism work and I told them that autistic people grow up to be lawyers and doctors and teachers and janitors and Moms and…. I was uninterrupted by one of the girls who said, “And mass murderers”. I asked her if she was kidding. She was not. EVERYONE thought Holmes is autistic and that link was connected very clearly in that room.

This is real life folks and real bad for all of us.

The Change.org petition demanding a retraction from Scarborough currently has just under 11,000 signatures, but the most visible Autism organization, Autism Speaks, has decided to sell autistic people out to get airtime for themselves on Scarborough’s program, and the silence from other media critics has been deafening. This is not a partisan or political issue, it is a matter of upholding the media’s most solemn duty, to inform the public, and to repair the harm of misinformation.

Autism advocates can explain that not only is there no evidence linking autism with mass murder, but that people with Autism Spectrum Disorders are far more likely to be the victims of violent crime than the perpetrators of it, until they’re blue in the face, but they can’t hope to rival the reach of Morning Joe, much of whose audience, in turn, influences news and policy, and they can’t count on fundraising ribbon machine Autism Speaks to help out. No other news outlet has seen fit to call Scarborough out.

Where does that leave them? Alone in a population that has now been dangerously misinformed about them, and the people they love.