Scarborough: Difficult For Obama To Be ‘Gracious’ After Being Treated Like ‘Second-Class Citizen’ For 4 Years
video

Scarborough: Difficult For Obama To Be ‘Gracious’ After Being Treated Like ‘Second-Class Citizen’ For 4 Years 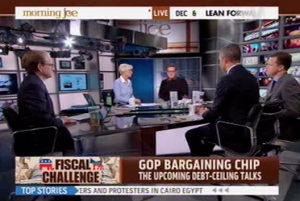 On Thursday, Joe Scarborough examined the way both sides are handling themselves as the fiscal cliff hoopla continues. Particularly, he focused on President Obama who is facing what he deemed to be an interesting and difficult dynamic in his second term — after being treated so poorly in his first.

“In my toughest political battles, every time I won, the bigger the victory, the more gracious I was afterwards,” Scarborough said. “That’s how you get things done.”

“This is all about men,” she added, noting that women would be more reasonable and “actually get something done.”

“He has been knocked around and treated like a second-class citizen as president of the United States by a third of the American public,” Scarborough said. “And then he wins a big victory and immediately he’s hearing from people like us, ‘You’ve got to be gracious to those people.’ Politics is sort of a rough and ugly game at times.”

The clip below, via MSNBC: