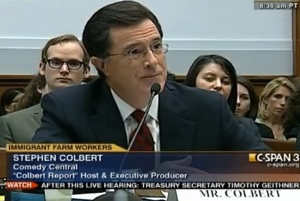 There was good reason for the cable news obsession and Internet buzz surrounding Stephen Colbert‘s congressional testimony. It was, at best, a bizarre display of really smart and nuanced performance art, and at worst, a creepy, ego-driven promotional moment that mocked the legislative process. However, what nearly everyone has missed was the moment where Colbert broke character to genuinely raise issue of migrant workers.

The moment occurred at the end of the question and answer period, when Colbert was asked by Rep. Judy Chu why he was focusing on this particular issue.

Colbert appeared thoughtful, if not stunned. Gone was the know-it-all “truthiness” expert, suddenly replaced by a father of three, part time Sunday school teacher and citizen who was legitimately concerned about the plight of the migrant workers. Colbert answered why he chose this issue by saying:

I like talking about people who don’t have any power. And this seems one of the least powerful people in the United States…are migrant workers who come and do our work, but don’t have any rights as a result. And yet, we still invite them to come here, and then at the same time, ask them to leave.

That’s an interesting contradiction to me. And, you know, ‘whatsoever you do for the least of my brothers,’ and these seem to be the least of our brothers. Right now, a lot of people are least brothers right now because the economy’s so hard. And I don’t want to take anyone’s hardship away from them or do anything like that.

But migrant workers suffer, and have no rights.

When one views the following video clip, and can see just how serious Colbert takes this, in a truly Christian way, then suddenly all of the theatrics that went on before to get us to this place seems worth it.

It was a true moment of redemption.