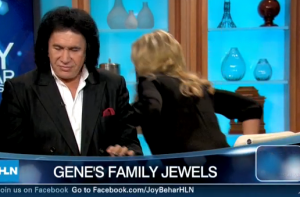 Was it real–or just reality TV? HLN’s Joy Behar still isn’t sure after a bizarre interview included a testy fight between KISS rocker Gene Simmons and his partner Shannon Tweed, who ultimately ripped off her microphone and stormed off the set. “I thought they were kidding,” Behar told Mediaite in an exclusive interview. “Then it got tense.”

The interview, which will air tomorrow night, began with an awkward moment as Tweed pulled Simmons’ sunglasses off his face. “I sat back a little bit and the tension just built.” HLN staffers say the couple had been fighting in the green room ahead of the interview. What’s not clear is whether all of it was part of the pair’s act–intended to promote their A&E reality series Gene Simmons Family Jewels, which–as luck would have it–opens its sixth season with Tweed confronting Simmons over his womanizing. After Tweed walked off the set (oddly wandering first into the background, which features a cityscape of New York), Simmons accused Behar of setting him up with questions about the Simmons having been photographed leaving a restaurant in the company of two young women. “Thank you for the question,” he said, sarcastically, leading Behar to say “you’re blaming it on me?”

In reality, Behar says, it was producers from A&E who provided video clips aired during the interview that dealt directly with the restaurant photo–and Simmons’ supposed womanizing. “I didn’t do anything out of turn, all I did was my job.” And Behar’s not convinced she wasn’t the one who was set up. “He left and I thought, I still don’t know, is it a hoax on me? I don’t believe The Bachelor, so why should I believe this?”

Watch an advance clip of the interview here, from HLN: