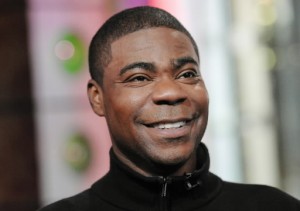 30 Rock actor Tracy Morgan is attempting to perform a complete 180 in order to make up for a series of homophobic comments he unleashed during a recent show in Nashville. The comedian had informed his audience that, were his son to ever come out, he would “pull out a knife and stab that little [slur]” and that gay people shouldn’t take offense because if “they can take a [verbing] [noun] up their [noun]… they can take a [verbing] joke.”

Morgan’s comments garnered a wave of attention after a young man who attended that show posted a very descriptive note about Morgan’s performance on Facebook and alerted LGBT organization “Truth Wins Out” about the rant.

Morgan eventually apologized for the tirade, even telling our sister site GossipCop that he “clearly went too far” and that his comments were “not funny in any context.” Besides, you guys, his friends know what’s in his heart.

To further make amends (or, you know, improve his public image), Morgan has now announced his desire to attend a rally in favor of same-sex marriage. In an interview with GlobalGrind conducted by Russell Simmons, Morgan says that he would likely love his son even more were he ever to come out:

The truth is if i had a gay son, I would love him just as much as if he was straight… I might have to try to love even more because I know of the difficulty that he would have in society.

Now this really and truly is some bull[noun].

I don’t care what’s in your heart, Tracy Morgan. I don’t care what your family or famous friends believe is in your heart. I don’t much care to hear you spit euphemisms about your inner state or how wonderful you are as a human being, really pinky promise. And I don’t actually care about whether or not you hate gay people. What I care is about is the impression you seem to have that any community – in this case, the gay community and its allies – would be so completely stupid and gullible and easily placated as to buy the act you’re attempting to sell.

You have displayed a history – not one isolated instance, but a pattern of behavior – of bashing gay people, but, when faced with scorn and disgust, when presented with the consequence of delivering hate speech, you suddenly turn around and announce you’re suddenly pro same-sex marriage? It doesn’t work like that. Sociopolitical issues wrought with tension and history are not yours to use as strategic game pieces to win back favor with the public and the media. This is an issue that matters to people, and it matters beyond what supporting or denouncing it might mean for their popularity and paychecks.

You’re apologizing to save face and, hey, that’s fine. You have a career and a reputation to think about, and there are times when individuals in the public sphere have to hide their true feelings behind a mask that’s palatable and marketable. But don’t use same-sex marriage as your pet project to try and win back favor and then walk away from it as soon as the frenzy around your colossal hatred dies down and America can go back to laughing and sighing at your antics as Tracy Jordan.

You’re not a warrior for gay rights; you’re a hypocrite trying to save face in addition to acting as a symbol of an extremely flawed celebrity culture. And I think – I hope – the American public is intelligent enough to know the difference.