Soledad O’Brien Confronts GOP Governor On Gun Control: ‘What Are You Willing To Change?’
video

Soledad O’Brien Confronts GOP Governor On Gun Control: ‘What Are You Willing To Change?’ 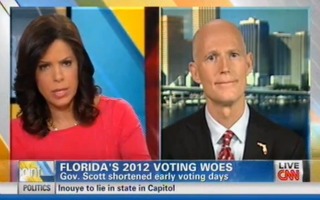 Florida Governor Rick Scott (R-FL) appeared on CNN’s Starting Point Wednesday morning and found himself under intense scrutiny for his stance on gun control legislation. Host Soledad O’Brien grilled the governor for refusing to answer her questions on the matter, asking, “What are you willing to change?”

O’Brien repeatedly questioned Scott about any specific measures he might be willing to support and was met with vague responses such as, “I support the Second Amendment.” O’Brien responded she did, too, but tried to refocus the conversation back to possible legislative reforms, such as increased background checks or even, perhaps, arming teachers as some GOP officials have suggested. Scott simply stated his belief that at this time, we should “respect the families” and “mourn their loss” but declined to answer more specifically.

O’Brien continued to press the governor, saying despite the impulse to “wait,” she had covered enough tragedies to know there would be another one. Scott again refused to answer with any precision but replied, “Right now, what we ought to be doing, let’s talk about all of the issues and think about what we can do to improve it.”

“Okay. I think, with all due respect, are you not going to answer my question, because I guess — I just want you to tell me what you would be comfortable to support, and I get it, it will be part of a conversation, but I think there have been a number of things on the table and I don’t feel like you’re telling me, you know, should people not be able to buy those high-capacity magazines?… What thing are you willing to say would be a good start, that would you bring to the table in control in any conversation about guns?”

Scott deferred again and said again his focus was to “respect the families, mourn their losses” and “then start the conversation.”