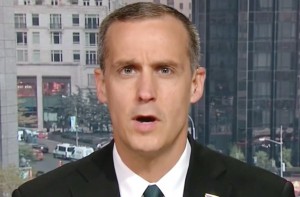 CNN’s decision to hire former Donald Trump campaign manager was a pretty controversial one––one that has apparently angered a number of people within CNN.

Page Six reported last night that a lot of people at CNN are livid––especially female staffers––and, in the words of one insider, “CNN is facing a near internal revolt over the Corey hiring.”

And apparently some are considering “publicly demanding” that Lewandowski be let go.

Someone else at CNN reportedly said that “Everyone at CNN — and even people who used to work there — are pissed about Trump’s former campaign manager being hired on salary.”

And, in fact, former CNN Chief White House Correspondent Jessica Yellin tweeted this out this week in reaction:

And her sentiments just happened to get RT’d by former CNN anchor Soledad O’Brien:

Now, there are a number of reasons why people currently at CNN might have a problem with Lewandowski, whether it’s the time he threatened a CNN reporter or the time he grabbed Michelle Fields or the reports that he has a long history of abusive and sexist behavior. Or, you know, his reported threats at other reporters (Fox’s Megyn Kelly confirmed this week she was on the receiving end of one of them).

It appears, however, that Lewandowski’s hiring will be addressed on CNN’s media affairs program Reliable Sources tomorrow at 11 am EDT.

We have reached out to CNN for comment on this report and will update this post accordingly.