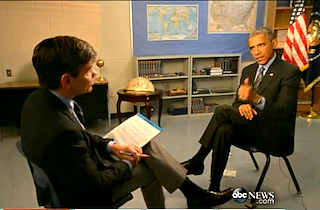 ABC News’ George Stephanopoulos pressed President Barack Obama Sunday morning on his executive action on immigration, whether it was really keeping in precedent with previous presidents’ immigration actions, and whether future GOP presidents could pull the same move on whatever their hearts desired.

Stephanopoulos posed the hypothetical that a GOP president might buck Congress’ refusal to lower taxes and decide not to prosecute people who don’t pay capital gains taxes.

“The reason that we have to do prosecutorial discretion in immigration is that we know we are not even close to being able to deal with the folks who have been here a long time,” Obama said. “The vast majority of folks understand that they need to pay taxes, and when we conduct an audit, for example, we are selecting those folks who are most likely to be cheating. We’re not going after millions and millions of people who everybody knows are here and were taking advantage of low wages as they’re mowing lawns or cleaning out bedpans, and looking the other way”

RELATED: Wallace to Dem Rep.: How Can Obama Ignore Congress on Immigration, Then Ask Them for Money?

“So you don’t think it’d be legitimate for a future president to make that argument?” Stephanopoulos asked.

“With respect to taxes?” Obama said. “Absolutely not.”

Stephanopoulos also disputed the claim that Ronald Reagan and other presidents had issued similar immigration orders. “In that case there were bipartisan bills passed,” he said. “They were acting after the bills were passed, not because Congress did not act.”

“I’m not sure that argues in favor,” Obama replied. “If Congress acted specifically and left something out and then a President goes ahead right afterwards and does more than Congress agreed to, it’s actually not different. It’s similar. The fact is is that we exercise prosecutorial discretion all the time. And, you know, the primary response that I have to Speaker Boehner and others is go ahead and pass legislation. They don’t need me to act.”