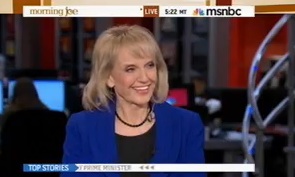 Arizona Governor Jan Brewer appeared on MSNBC’s Morning Joe on Tuesday morning to discuss her new book, “Scorpions For Breakfast” and strongly defended her aggressive border control policy with the implementation of the controversial anti-immigration law SB 1070. “We are not racist,” Brewer insisted. “We are not bigoted but we know that, quote, the liberal media generally wants to shove that race card out there. They want to throw it around very, very loosely, to shut down the debate. We have a severe problem.”

Former RNC Chairman Michael Steele had asked Brewer if there were repercussions for the Republican Party among Hispanics for taking such a hardline stance on immigration. “There has been some political damage done more broadly speaking to the GOP. The tone, the rhetoric of the debate has moved away from some of the core centrals that you advocated in terms of border security, and the like. How does the GOP now in your estimation reconcile itself with the community of voters that is only going to grow both in terms of its number and certainly in its influence over the next four or five years as we look at the political process involved?” questioned Steele. “We can’t afford to have Hispanics align themselves with one party in this nation knowing that a lot of the values and interests that we have are common. How do we reconcile this given the heat of this debate so far?”

“I believe that 70% of people in America, they understand that and they agree with us in Arizona,” argued Brewer. “Every poll will tell you — they agree with what we’re doing.”

Host Joe Scarborough asked Brewer where she was getting the 70% number, but she could not cite her statistics.

Brewer may have been referencing a 2010 Angus Reid Public Opinion poll that said 71 percent of Americans supported “arresting people who couldn’t prove they were in the United States legally.” However, Brewer was ignoring Steele’s larger point about Latino backlash to the law, which an Arizona State University poll showed 81% of which opposed SB 1070.

Watch Brewer defend her anti-immigration law on Morning Joe below via MSNBC: