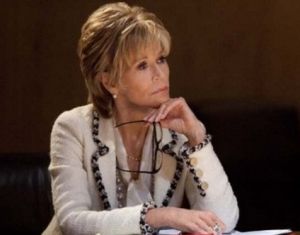 I listened to a Grantland podcast the other day with Bill Simmons and Louis C.K. in which they discussed, among other things, The Newsroom. Louis C.K. said he was looking forward to the show, since he gleefully watched every episode of Studio 60 On The Sunset Strip, just sort of reveling in what it looks like when a genius (which, for all of his problems, I do believe Aaron Sorkin to be a genius) writes a really terrible show. I feel the same way about The Newsroom. For all the ways it is ridiculously bad, it is ridiculously fun to watch and be mad at it.

This week, we transition from the ponderous opening credits to a scene in which the cast watches a clip from 2004. It is of Richard Clark acknowledging the failure of the U.S. government with respect to the 9/11 attacks. It is boring watching the characters watch the news from a few years ago. Now they must know how we feel! This is a setup for an apology from Will McAvoy to his viewers — an apology for being a ratings whore and contributing to the decline of cable news. We see him writing the speech in his apartment and various characters receiving it in the middle of the night — including Jim, who gets woken up by his FAX MACHINE receiving the speech, which for some reason he keeps next to his bed — and hear him declare his allegiance to the great men of cable news (Murrow and Cronkite and Russert and boy, things sure were better when we had all of those great men running around).

Everyone looks very inspired (and it is a pretty good speech, pretension aside). Later, Don finds Jim in the newsroom, and tells him he saw the show from a bar, which, what bar is tuned to the evening news? He would have loved to be part of something like this, he says, but now he’s at the 10 o’clock hour covering all the bubblegum news Will just railed against. Jim sort of apologizes, claiming that they didn’t intend to make Don and his show look like idiots, but Don isn’t in a forgiving mood.

So: the rest of the episode is about what the new “NewsNight” looks like, and how the network reacts. The show’s new M.O. seems to be making other cable news shows look bad and crusading against the Tea Party. We see the former in how they report on the Times Square bomber (it’s NBD, the system worked as it should, and the person who reported the smoking vehicle was a Muslim from Senegal) and the latter in an impassioned speech Will makes to Sam Waterston about ultra right-wing conservatives ruining everything. Basically, he argues that the Tea Party is making conservatism look bad just like hippies made progressivism look bad in the 1960s, except no one was electing hippies to public office. He admits that last point, which in my mind renders his analogy a false equivalency, but neither he nor Sam Waterston nor Mackenzie seem to think so. When Mackenzie pipes up with her agreement Will yells “I didn’t even know you were HERE!” Women! Popping up all over the damn place! It’s like I Dream of Jeannie up in here!

There is a montage, set to classic rock, of Will interrogating Tea Party members (who, to be fair, say some deeply stupid stuff on the air — the same stupid stuff they definitely said in 2010) but it reads like the televisual equivalent of shooting fish in a barrel. I’m not totally sure what the benefit of an entire cable news show punching downward is. Neither is Leona Lansing, played by Jane Fonda, who interrogates Sam Waterston about what’s going on with the show in a flash forward within the flash back? So it’s 6 months after we see all the Tea Party crusading going on, but it’s still 2010. Jane Fonda is pissed that “NewsNight” has turned into a “courtroom,” and Sam Waterston exposits that after Will graduated college at 19 and law school at 21 (barf) he was a prosecutor in New York City where he racked up a 94% conviction rate, and Sam Waterston sicced him on the news because “the American people need a f*ckin’ lawyer!”

There is also a subplot that is deeply stupid, in which Will keeps going on dates with women who meet him in the newsroom beforehand, giving Mackenzie the opportunity to act jealous and insane and make fun of them for being cheerleaders (which Will responds to by going out with a brain surgeon the next night?). Maggie eventually has the gall to tell Will that he’s being cruel, a crossing of boundaries not at all mitigated by her admission that she’s overstepping them, and he apologizes only to get ambushed by Mackenzie’s new boyfriend in the control room. I have a perfect solution for both of these problems — everyone, stop letting your girlfriends/boyfriends loose in your workplace.

So the Tea Party thing eventually comes to a head with Will taking on the Koch brothers’ funding of the movement, which really rankles Jane Fonda, and attempting to ask a newly elected Tea Party candidate about his plans for the debt ceiling vote, which we know will come up later. Maggie has a panic attack in the middle of a meeting, giving Jim the opportunity to meet her on the terrace and rescue her with his manly psychiatric training that he picked up while he was embedded in Iraq. They have A Moment. Also ridiculous is that we see that Dev, who heretofore was not interested in getting involved with his coworkers’ personal lives, is encouraging Jim to make a go of it with Maggie. Oh, and he dictates his blog posts verbally to his computer via a headset, which is not a thing any normal person has done or will ever do.

Ultimately, Jane Fonda demands that Sam Waterston rein things in now that the election is over; he refuses; they scream at each other (Fonda is giving off some major Stockard Channing/Abbey Bartlet energy here). What it comes down to is that, even though she too agrees that the Tea Party is insane, she has to be able to go to Congress for…vague stuff that isn’t really explained. Sam Waterston draws a completely insane parallel between Joe McCarthy and Michele Bachmann that Fonda rightly shoots down, characterizing the latter as a “hairdo.” If he doesn’t rein it in, she’ll find a way to fire Will. In a flashback-flashback, Sam goes out for post election night drinks with Will and co., where he gets an email from Jane Fonda asking for a meeting — the same meeting we saw in this episode. He lies, and tells Will that she probably wants to congratulate him, and they toast “God Bless America” in unison.