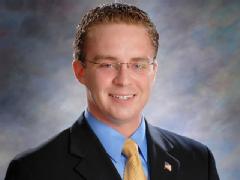 It looks like getting caught with your pants down is an activity not exclusive to Anthony Weiner and politicians at the federal level. In Massachusetts, 26-year old Democratic state representative Mark Cusack is being investigated for a late night incident that involved “inappropriate behavior” with a female aide who worked for another legislator.

The Speaker of the Massachusetts House is investigating the circumstances, but unlike in the case of Weiner, Cusack actually has some people speaking out in his defense. One fellow official in the news report below suggests that Cusack is “a great kid . . . he’s young, he made a mistake, and I hope he survives this.” Another legislator however said, “this just makes everybody look bad. It’s Animal House all over again and makes us look like we’re a joke.” Given that Cusack is about twenty years younger than Weiner, might such immature behavior be more readily forgivable by his constituents?

UPDATE: The Massachusetts House Speaker’s investigation is now over, and found that Cusack did not violate any House law or policy:

The investigation is now concluded, and Speaker DeLeo says they did not violate any House law, House rule or House personnel policy. He says the two acknowledged being in the Chamber but just for a few minutes, and there was a witness.

However, in a statement DeLeo writes: “In the course of my review, I found the Chamber was accessed during a post-budget gathering which took place in the Speakers suite after the close of business on April 28, 2011. The access took place through private door…I have learned that some of those present were drinking beer…it appears that no persons present were below the age of 21.”

Watch the clip below from WCBV-TV Boston: