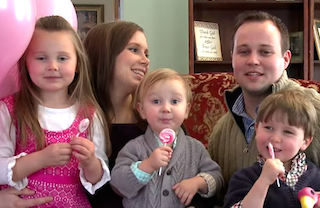 How has TLC responded to the revelation that one of its reality stars, Josh Duggar, has confessed to numerous counts of molestation? Apparently by moving ahead with a scheduled marathon of his family’s 19 Kids and Counting show.

When viewers noticed that TLC just happened to be airing its marathon the same night that Duggar and his parents had issued apologetic statements to the press, they started tweeting angry messages at TLC, some of which contained the hashtag #CancelTheDuggars.

Below are some of the tweets that appeared last night and this morning:

Oh my God, catching up on the Duggar molestation news and cover-up, and @TLC is AIRING A 19 KIDS AND COUNTING MARATHON RIGHT NOW

Airing on @TLC right now is 19 Kids and Counting marathon.

Is it cynical or tone deaf that TLC is airing a 19 Kids and Counting mini-marathon in wake of Josh Duggar news?

After news of Josh Duggar sexually abusing his sisters, @TLC airs a marathon of 19 Kids and Counting instead of cancelling it. Disgusting.

TLC very sensitive to the Josh Duggar child molestation story & have responded by thoughtfully running a marathon of "19 Kids and Counting".

Interesting that @TLC is sticking with the "19 Kids & Counting" marathon. This hour's episode is titled, "Duggars Guide to Love." Seriously.

Some scheduled episodes on Friday appear to have been replaced by other programming. But so far, TLC has only linked to the Duggar family’s statement on its Twitter account and has not issued comments to the press:

Statements from the Duggar family via @people: http://t.co/EdOiRyPeI9

Watch a recent clip of Josh Duggar and wife Anna revealing the gender of their fourth baby, via TLC:

UPDATE — 2:15 p.m. ET: TLC has now decided to pull all upcoming airings of 19 Kids and Counting reruns from its schedule. The network has not announced whether or not they plan to move forward with new episodes.