Trayvon’s Father Testifies Before New ‘Black Men And Boys’ Caucus: I Will ‘Not Give Up The Fight’
video

Trayvon’s Father Testifies Before New ‘Black Men And Boys’ Caucus: I Will ‘Not Give Up The Fight’ 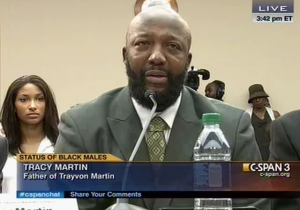 Tracy Martin testified before the newly created Congressional Caucus on Black Men and Boys to talk about his efforts to keep fighting for his son Trayvon Martin and young black men across the United States. He talked about the efforts of the Trayvon Martin Foundation to tackle issues like crime and gun violence to make sure no other family has to go through what his did.

Martin said that they won’t let the verdict “sum up who Trayvon was,” and declared, “I vow to do everything in my power not to give up the fight for him.”

RELATED: Hip Hop Icon Questlove Walked Off Gig After Trayvon Verdict: ‘Felt Like’ ‘I Was Watching My Own Trial’

Martin praised President Obama‘s comments last Friday about his own experience as a black man as “so important to the American people,” citing the undeniable importance of the president himself weighing in on this issue.

Martin said the focus now should be asking what we can do “to stop someone else’s child from being killed.” He explained the Trayvon Martin Foundation will fight against “senseless” crime and gun violence, as well as creating mentor programs and educating people about how Florida laws such as Stand Your Ground apply to them.