Trump Denies Mocking Disabled Reporter: ‘He Was Groveling’ to Change His Story 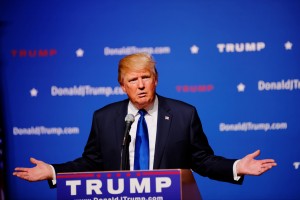 Donald Trump recently sat down for a lightning round Q&A session on Fox, where he continued to insist that there’s nothing to one of the most controversial chapters in his entire campaign.

The mogul spoke with Brian Kilmeade, where he promised he was being “sarcastic” with Wednesday’s suggestion for Russian cyber-espionage, and he finally conceded that John McCain is, in fact, a war hero. After that, Kilmeade asked Trump did he or did he not once mock a reporter with a physical disability.

“I didn’t know who the reporter was. He was groveling because he wrote a good story,” Trump said. “What I was indicating was a man that was groveling. He was groveling to try to change a story he had written many years before so it worked out badly for Trump… I had no idea he disabled.”

.@realDonaldTrump says a lot of attacks on him aren’t true, so we sat down for a rapid fire true or false. @kilmeadehttps://t.co/kfp8rSS821

New York Times reporter Serge Kovaleski became a major media focus in November when Trump cited an old article of his as proof of the mogul’s controversial claim that American Muslims were holding mass public celebrations of the 9/11 attacks. Kovaleski pointed out that his piece only noted reports of celebrations that were never officially confirmed within the United States, to which Trump responded by mocking him in a way that seemed extremely resemblant of Kovaleski’s Arthrogryposis.

Kovaleski reported on Trump multiple times in the 80s and indicated that they were on a first-name basis at one point, but despite that “world’s greatest memory” of his, Trump repeatedly denied that he knew him.

Watch above, via Fox