Trump: Hillary Lies About Everything, and I Demand an Apology for ISIS Video Claim
video

Trump: Hillary Lies About Everything, and I Demand an Apology for ISIS Video Claim 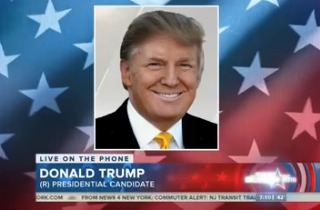 While Donald Trump has attacked Hillary Clinton and called her a liar on a regular basis, he is continuing to attack her for saying that ISIS uses his rhetoric as a recruitment tool at the Democratic Debate.

When he appeared today on NBC Today, Matt Lauer asked Trump whether he can criticize Clinton on this standard when he has made numerous claims that run contrary to established facts. Lauer specifically directed reference to Trump’s claims about Muslims celebrating 9/11, when there has not been any verifiable documentation that it happened on the scale of thousands Trump repeatedly claims.

Trump began by saying that he was already “exonerated” for his 9/11 claims, and said that when it comes to Hillary, “she always lies,” and “she’s been a mess no matter where she’s been.”

Lauer continued the questioning by addressing how Trump’s campaigning frequently makes use of exaggeration in its promotion, and asked “is Hillary Clinton lying or taking a page out of Donald Trump’s playbook?”

Clinton’s National Press Secretary Brian Fallon Monday responded to Trump’s demand, releasing a statement saying “hell no” the Democratic candidate will not apologize to Trump “for correctly pointing out how his hateful rhetoric only helps recruit more terrorists.”

Will Clinton apologize to Trump? “Hell no,” @brianefallon says in statement pic.twitter.com/EbcCBw7QG1