Trump on Fox: Obamacare Worse Than Gov’t Shutdown, Will ‘Shut Down the Country’
VIDEO

Trump on Fox: Obamacare Worse Than Gov’t Shutdown, Will ‘Shut Down the Country’ 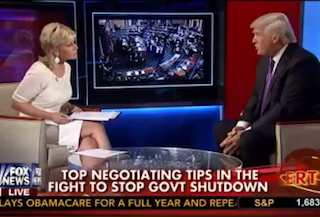 The Real Story with Gretchen Carlson debuted on Fox News Monday afternoon and one of the former Fox & Friends’ host’s first guests was an old friend: Donald Trump. Seated across from each other in plush chairs more reminiscent of her morning show than the Megyn Kelly-hosted afternoon program she’s replacing, Carlson asked the “premiere negotiator” to share his advice for how Republicans and President Obama might be able to come to a last minute agreement to avoid a government shutdown at midnight tonight.

“Whether there’s a shutdown, who knows,” Trump added, saying, “that would be horrible if it was. But, there’s a very good chance, because Obamacare is a total disaster, and ultimately, Obamacare anyway will shut down this country.”

In the end, Trump did not think a shutdown would be as “catastrophic” as everyone is making it out to be. “I think actually the Republicans have a lot of cards,” he said, “but if they’re going to play those cards, they better play them now.” He predicted that Obama would take the brunt of historical blame for the shutdown if it happens. “I really think the pressure is on Obama to make a deal because he doesn’t want this in his resume,” he said.

Towards the end of the interview, Carlson decided to take a left turn and show her audience a decades old photo of she and her guest in mid-’80s Atlantic City. Trump flattered the host by saying she looked better and he looked worse 25 years later.

Before he left, Trump congratulated Carlson on her debut, saying, “You’re going to have great success, I have no doubt about it.”