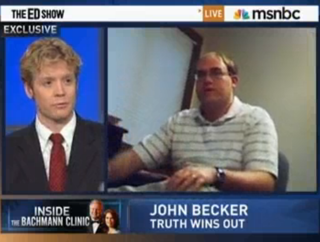 Rep. Michele Bachmann is facing the beginnings of what may be the defining scandal of her campaign as more information comes to the fore on her husband’s mental health clinic, which patients therein are now claiming engages in “gay reparative therapy,” a discredited method by which some believe homosexuality can be “cured” away. Tonight, Ed Schultz spoke to an activist that went undercover and asked for the therapy at the clinic, and ultimately classified Bachmann’s views as “dangerously archaic.”

Schultz spoke to John Becker of the group Truth Wins Out, who said he “put myself back into the mental place that I was in as a teenager” in order to act as if he wanted to receive therapy to become straight. According to Becker, none of what he saw (that he could determine) was illegal, but certainly unethical– for example, he did not receive consent forms. And he did confirm that “absolutely, without a doubt, the treatment and advice that I was given meets the bar for [reparative therapy].”

Ultimately for Becker, who had never participated in any such undercover operations before, he said the experiment was eye-opening for him because “we live in the 21st century its difficult to imagine that there is a large segment of our society that still believes that homosexuality can be removed.” He also noted that, from what he saw there, he would classify Rep. Bachmann’s views as “dangerously archaic” and redefining of how the federal government interacts with the LGBT community should she win the presidency.