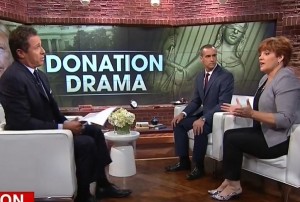 Presidential campaigns have long deployed surrogates to make the case with the press when their candidate isn’t available, but it helps if the surrogates are prepared. Former New York City Council Speaker Christine Quinn blew a chance to help Democratic presidential nominee Hillary Clinton when she was caught flat-footed during an appearance on CNN’s New Day Wednesday morning.

Anchor Chris Cuomo, after confronting former Trump campaign manager Corey Lewandowski about the allegations of “pay for play” against Donald Trump, turned beck to Quinn to ask her about the just-released FBI notes, and a particular talking point that has emerged:

Chris Cuomo: 13 phones they destroyed with hammers, the FBI report says when it comes out? how are your voters supposed to take that? It’s not just about “Oh, I had my own e-mail server, I shouldn’t have done it. Hey, they said I could delete e-mails so I did. Bashing phones with hammers, who does that?

Christine Quinn: At the end of the day —

Chris Cuomo: I’m saying, if you’re going to get high and mighty about what Trump did, how do you feel about the phones?

Christine Quinn: At the end of the day, the FBI said there’s nothing to investigate, nothing to move forward.

This point from the FBI notes is yet another that’s been spun negatively, but has not been examined critically by the press. It would have been nice if Christine Quinn, or anyone else who has sat mute while this talking point has been raised, would ask just what is a person like Hillary Clinton supposed to do with her old cell phone? The implication is, I suppose, that destroying a phone means you have something to hide, but Hillary Clinton is famous and important, so she actually does have things that it’s perfectly reasonable to want to hide, like, say, her contact list. How would you like to be the aide responsible for some garbage-picking nerd getting President Obama‘s phone number?

But even notwithstanding that obvious point, Quinn doesn’t even know that according to those FBI notes, there were only eight Blackberries that Hillary used while she was at the State Department, and only two, at most, were destroyed with a hammer. From page 9 of the FBI report:

(Clinton aide Justin) Cooper did recall two instances where he destroyed Clinton’s old mobile devices by breaking them in half or hitting them with a hammer.