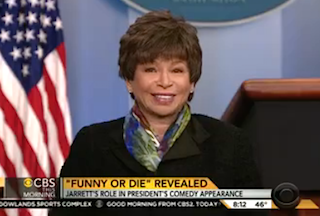 Senior Advisor to President Barack Obama, Valerie Jarrett appeared on CBS This Morning Wednesday and among other issues, she gave an update on what she called the “overwhelming success” of the president’s appearance on Funny or Die’s Between Two Ferns with Zach Galifianakis.

Jarrett, who played some role in orchestrating the video, said it “wasn’t hard” to get the president to participate. She suspected that traffic to Healthcare.gov yesterday will “break all kinds of records,” stressing that it increased 40% from Tuesday to Wednesday. “The fact that the website traffic has gone up is really an indication that it is working,” she said.

RELATED: Thus Far, Only .6% of Obama’s Funny or Die Viewers Converted to Healthcare.Gov

CBS reported that as of this morning, 11 million had viewed the video, sending approximately 32,000 people to the Obamacare website, giving a click-through rate of 0.29%, which while decent is certainly not everything the White House could have hoped for. Of course, that number does not include anyone who watched the video and then arrived at Healthcare.gov through Google or other avenues.

Meanwhile, the video remains on the homepage of Funny or Die’s website for the second-straight day Wednesday and as of 4pm ET has reached 13 million views, making it the 6th most-watched video in the website’s seven year history. Watch the full video below: