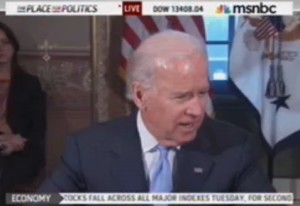 Vice President Joe Biden‘s task force on gun violence, announced three weeks ago in the wake of the tragic mass shooting in Newtown, Connecticut, began a series of meetings this week by conferring with representatives of victims’ groups and gun safety organizations Wednesday morning. The Vice President opened the meeting, at the Eisenhower Executive Office Building next to the White House, with remarks, to attendees and reporters, in which he laid out the goals of the task force, and spoke briefly about his upcoming meeting with the National Rifle Association.

The Vice President began by noting that it has been nearly four weeks since the unspeakable events at Sandy Hook Elementary School, an event which, he said, has “awakened the conscience of the country” like “like nothing I’ve seen in my career.”

Biden said that of the many tragic events we have seen, none has “touched the heart of the American people so profoundly as seeing those — learning of those young children, not only being shot, but riddled with bullets.”

“So we’re here today with you on a matter that requires immediate action,” Vice President Biden continued. “Urgent action. And the President and I are determined to take action.”

Biden assured attendees this was no mere photo op, or empty sounding board. “We are vitally interested in what you have to say,” he said, “and as the President said, if you’re actions result in only saving one life, they’re worth taking. But I’m convinced we can affect the well-being of millions of Americans, and take thousands of people out of harm’s way if we act responsibly.”

Biden also addressed his upcoming meeting with groups which include the NRA. “You should know that tomorrow I’ve also invited the gun owners and the NRA to come and make their case, as well, before us,” he said. “I want it clear to the American public that, on behalf of the President, we’re reaching out to all — all parties, on whatever side of this debate you fall.”

But the Vice President also made it clear that such a meeting would not dissuade the task force from acting. “But the President is going to act,” he said. “There are executives orders, there’s executive action that can be taken. We haven’t decided what that is yet. But we’re compiling it all with the help of the Attorney General and the rest of the cabinet members, as well as legislative action that we believe is required.”

The Biden task force has reportedly already arrived at a preliminary set of recommendations, which include:

The Vice President’s remarks were generally an echo of what the administration has been saying about the task force, and gave little in the way of clues about whether their eventual approach would be some comprehensive package, or a series of individual measures.