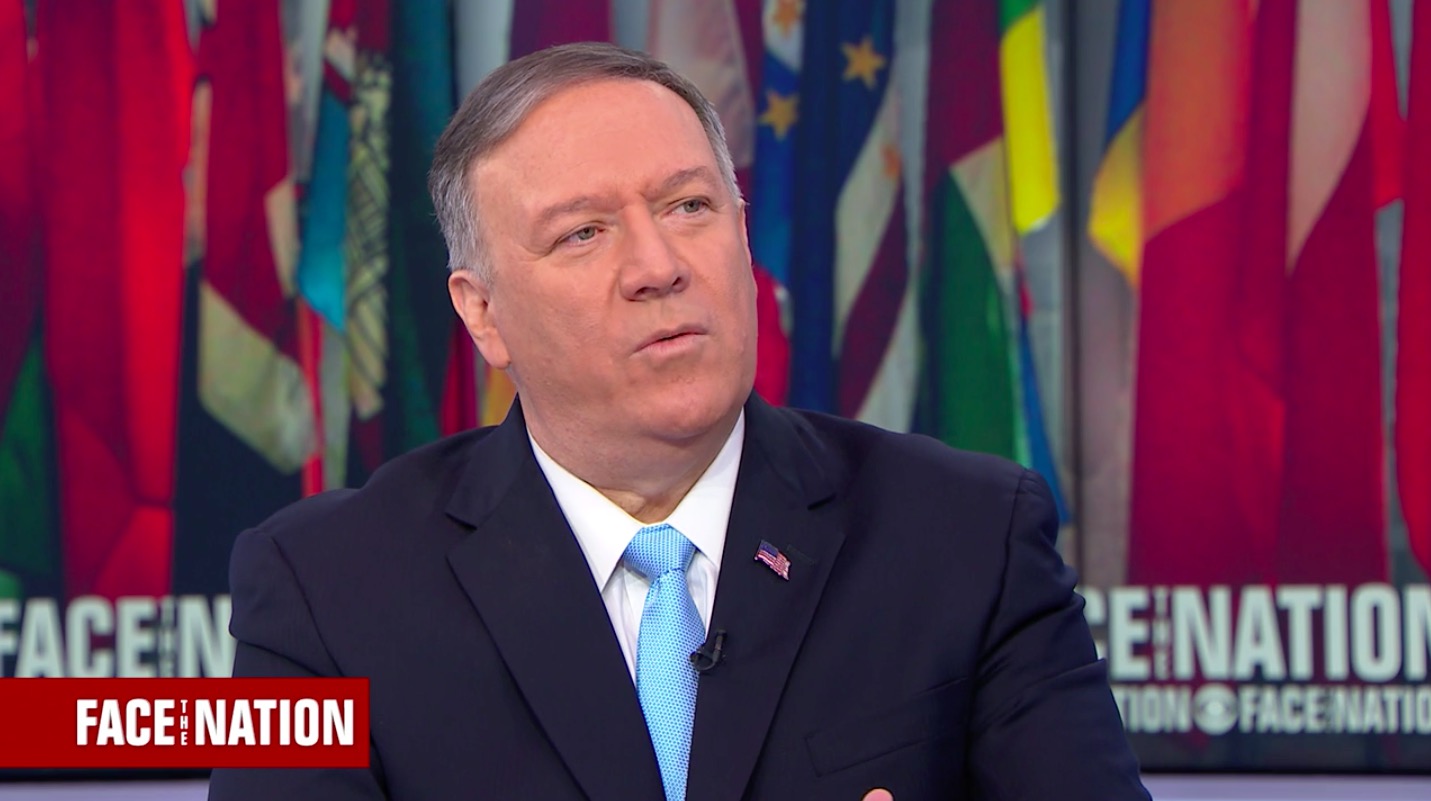 Secretary of State Mike Pompeo appeared on all five Sunday news programs — the full Ginsburg — this morning, after President Donald Trump made the shock announcement last night that he had cancelled a secret meeting at Camp David between Taliban leaders and the president of Afghanistan.

Trump also said he was calling off months-long negotiations aimed at reaching a peace agreement between the two sides. He pinned his decision to call off the meeting on a suicide bomb attack this week in Kabul that killed an American soldier and 11 others.

….an attack in Kabul that killed one of our great great soldiers, and 11 other people. I immediately cancelled the meeting and called off peace negotiations. What kind of people would kill so many in order to seemingly strengthen their bargaining position? They didn’t, they….

….only made it worse! If they cannot agree to a ceasefire during these very important peace talks, and would even kill 12 innocent people, then they probably don’t have the power to negotiate a meaningful agreement anyway. How many more decades are they willing to fight?

Pompeo faced the wrath of all five Sunday show anchors — NBC’s Chuck Todd, CNN’s Jake Tapper, Fox’s Chris Wallace, ABC’s George Stephanopoulos and CBS’ Margaret Brennan — who confronted him over the stunning decision to hold a meeting with the Taliban just days before the anniversary of the September 11th attacks.

Here are the must-see moments from Pompeo’s appearances:

Appearing on NBC’s Meet the Press, Pompeo confirmed that peace talks between the Taliban leaders and the Afghan president, Ashraf Ghani, were off. “For the time being that is absolutely the case,” he told Chuck Todd.

CNN’s State of the Union: Jake Tapper hits pompeo with the age-old question: What if Obama…?

Could you imagine what Pompeo would say if Obama invited the Taliban to Camp David for a peace talks three days before the anniversary of 9/11? Tapper put that hypothetical to the secretary of state on Sunday.

“I can’t help but think that if a Democratic president had talked about having the Taliban come to Camp David to negotiate a peace process that was not already a done deal, that you as a congressman, as a soldier, as a veteran, as a West Point graduate, that you would be rather upset?” Tapper asked.

“Yeah Jake, you’re just wrong about that,” Pompeo replied. “I’ve been fully supportive of this effort. The direction that we have taken, the State Department, the effort President Trump has given us guidance to go deliver on something that I think is important, it’s valuable. I think the timing is just right. We’ve made enormous progress.”

There is one person who did bash Obama for speaking with the Taliban: Donald Trump. This tweet 2012 has been making the rounds, and Tapper brought it up to Pompeo at the end of their interview:

While @BarackObama is slashing the military, he is also negotiating with our sworn enemy the Taliban–who facilitated 9/11.

“I’m very familiar with that,” Pompeo replied. “He was wrong because he didn’t believe that President Obama would keep our soldiers there, protect America’s interest, do the right things to ensure that Americans would be safe. That was the concern.”

Fox News Sunday: Chris Wallace wants to know whose idea this was

Perhaps the most unsparing in their questioning of Pompeo was Fox News anchor Chris Wallace, who asked the following — rather pointed — question: “Who thought it was a good idea for the President of the United States to meet with Taliban leaders who have the blood of thousands of Americans on their hands just three days before 9/11?”

Pompeo said it was President Trump:

“The president ultimately made the decision. He said, ‘I want to talk to President Ghani. I want to talk to these Taliban negotiators. I want to look them in the eye, I want to see if we can get the final outcome that we needed so that we could sign off on the deal.’”

The ABC News anchor peppered the secretary of state with questions on the decision to hold the peace talks at Camp David, the president’s country residence in Maryland.

Stephanopoulos brought up tweets from top Republican lawmakers Adam Kinzinger and Liz Cheney, who both voiced objections to hosting the Taliban at Camp David (though Cheney’s tweet somehow managed to praise Trump for the imbroglio).

When asked if the decision to host the Taliban was “wrong,” Pompeo argued that the United States has to deal with “bad actors” to achieve piece. Here’s his full answer:

“If you’re going to negotiate peace, you have to deal with some pretty bad actors. I know the history too of Camp David, indeed President Trump reflected on that. We all considered as we were debating how to try and get to the right, ultimate outcome. While there have often been discussions about war at Camp David, There have been discussions about peace there as well. There have been some pretty bad actors travel through that place. It’s an important place.”

CBS’s Face the Nation: Pompeo asked whether the Taliban had even accepted Trump’s invitation to meet

On Face the Nation, anchor Margaret Brennan read Pompeo a statement from the Taliban claiming that they received, but hadn’t accepted, the invitation to meet at Camp David. Pompeo offered something of a rebuke of those claims.

“Had the Taliban ever accepted the invitation to come to Camp David?” Brennan asked.

After Brennan read the Taliban statement, Pompeo replied, “There’s been some confusion, I think there’s other folks speaking.”

“We were confident that we were going to be able to have those meetings, what would be this afternoon, at Camp David,” he added.