Wendy Davis: ‘Most Loving Thing’ We Could Have Done for Daughter Was ‘Say Goodbye’
VIDEO

Wendy Davis: ‘Most Loving Thing’ We Could Have Done for Daughter Was ‘Say Goodbye’ 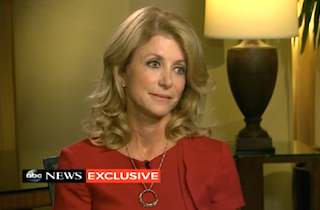 With State Senator Wendy Davis’ run for governor of Texas comes the requisite campaign memoir, in her case titled Forgetting to Be Afraid

. In the new book, Davis, who rose to prominence by championing abortion rights for women, reveals that she terminated a pregnancy 17 years ago after doctors detected brain abnormalities in her fetus. Two years earlier, Davis had ended another pregnancy after doctors deemed it medically necessary for her to do so.

On Monday, Davis sat down for an interview with Good Morning America’s Robin Roberts, in which she explained why she and her husband made the decision that they did.

“Our baby had a severe brain abnormality,” Davis told Roberts, saying that even if the baby did survive to term, it would almost certainly be in a vegetative state. “We knew that the most loving thing that we could do for our daughter was to say goodbye.”

“Like so many other families across this country, we made the difficult decision with as much love for our daughter as can be imagined,” Davis continued. Asked by Roberts if she can understand how some will disagree with her decision, Davis said, “This was how my family confronted this tragic experience. I respect so much that people make their own decisions, and that that decision is the one that is right for them.”

With her comments, Davis appears to be trying to put a human face on the difficult decision of abortion and demonstrate the wide variety of complications, both personal and medical, that can lead some women to go down that road. According to the Huffington Post’s poll tracker, Davis currently trails her Republican opponent, Greg Abbott, by more than 10 points.