What Kind of Wimps Does Fox and Friends Think Our Sailors Are?
Opinion
video

What Kind of Wimps Does Fox and Friends Think Our Sailors Are? 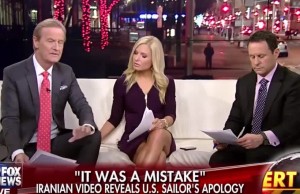 The media hype and conservative bedwetting over the 10 American sailors who were detained on Iran’s Farsi Island just hours before President Obama‘s State of the Union address, including Donald Trump demanding the sailors be returned to United States custody after they had already been released, is becoming too much to take. One narrative that has been picked up by the mainstream media and stretched thin over the entire planet by conservative media is this idea that the Iranians “humiliated” our sailors, and violated the law by using them in “propaganda” videos.

This breathless hype reached hemorrhagic fever pitch on Thursday morning’s Fox and Friends as the gang rolled out the familiar parts of the narrative that I just mentioned, plus kind of ragged on the sailor who was videotaped apologizing, and accused the Iranians of placing our sailors in “assassination or execution positions.”

At one point, the segment reached the point where the Fox hosts appeared to be mocking U.S. sailors for being taken into custody, as Anna Kooiman observed “If you’re somebody who lives in Iran and you feel oppressed there, you have thoughts cross your mind about rising up against the regime, do you think that thought is going to linger very long when you see images like this, of the mighty-might country of America doing this?”

…Kilmeade: Wait a second, we didn’t know they were going to be on their knees with their hands behind their heads. We didn’t know they would be in what appears to be a prison cell. our vice president was on national television saying why we apologizing. evidently we had engine failure. john mccain who knows a few things about the navy. his dad and grandfather were esteemed admirals. he knows there’s a huge problem here.

…Doocy: Here’s why that first image of them in the room with the woman with a head scarf is probably a violation of the Geneva Conventions, Article 13, because they state, and we’re talking about this picture right here, that any photos would violate the law because you’ve got to protect the prisoners against insult. In fact, you can see the woman in the head scarf is the quintessential image of public curiosity. And then the surrender images are deliberately humiliating Americans to their home audience. Keep in mind, this is a gigantic propaganda coup.

It goes on like that, probably for the rest of the day.

Before I get to the many problems with this segment, I have to say that Fox and Friends are not alone in this. Earlier today, I also saw CNN’s Barbara Starr still hyping the “propaganda” value of the videos and photos, and the “humiliation angle,” but Fox and Friends took it to another level.

The first problem is that the “humiliating” apprehension of our sailors was no different than how the U.S. Coast Guard would handle a couple of Iranian boats drifting into, say, the Chesapeake Bay. In fact, they were probably a good deal more restrained than that. Hell, I’ve never even been in the military, and I’ve been treated more harshly than this by authorities. The videotaping is a separate matter, but the actual apprehension was completely ordinary. As everyone already agrees, the boats had violated Iranian waters.

As for that “prison cell,” I’ve also been in a prison cell before. It didn’t have body pillows and a buffet. I’m not saying this was pleasant for our sailors, but I don’t think they’re going to be traumatized for life by it, waking up in a cold sweat screaming “FLATBREAD!”

The videos and the photos, on the other hand, are a legitimate issue. They don’t technically violate the Geneva Conventions because our sailors were not prisoners of war, but it’s definitely not a nice or friendly thing to do. There’s no disputing that.

I’m not sure it’s entirely fair to call it a “propaganda” video, though, since everyone already agrees that the sailors did make a mistake, albeit inadvertently. Is it propaganda if it’s true? And I also don’t think it’s fair to shade the commander for apologizing, since you can still say you’re sorry for doing something by accident. If he stepped on a guy’s foot, he wouldn’t be relinquishing his nation’s sovereignty by saying “Whoops! Sorry, dude, my bad.”

Having said all of that, I’d still be prepared to excoriate Iran over it’s parading of the incident, and over the gloating of their general, if he had actually been gloating when he said this:

“This incident in the Persian Gulf, which probably will not be the American forces’ last mistake in the region, should be a lesson to troublemakers in the U.S. Congress,” Major General Hassan Firouzabadi, head of Iran’s armed forces, was quoted as saying by Tasnim news agency.

Unfortunately, he wasn’t gloating. The Republicans in Congress are such idiots that they hae actually given Iran cover for their assholery, because that statement was made only after every Republican who could get near a microphone or a Twitter app immediately declared the incident a hostile act by the Iranians and a reason to scuttle the nuclear deal. Given that dynamic, the Iranians can credibly claim that they had little choice but to document their treatment of the sailors and broadcast it to the world to avoid an ugly incident.

So congratulations, Republicans. You have managed to turn a successful diplomatic effort to recover our brave, cool-headed sailors into a humiliating defeat. Take a bow.