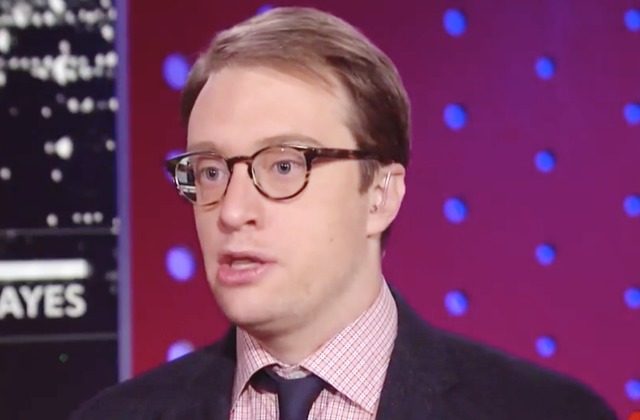 Amid the brewing controversy posing an existential threat to the NBC News careers of Andy Lack and Noah Oppenheim, there is a notably missing voice in the coverage: Vanity Fair contributor Gabriel Sherman.

A quick look at stories published since he started contributing for Vanity Fair in the summer of 2017 shows that he has ignored the NBC story. Similarly, Sherman’s Twitter feed from the last week also includes no mention of the NBC scandal. Mediaite has asked Sherman about this and has not yet received a response.

Sherman’s bona fides in covering cable news executives, particularly surrounding sexual misconduct scandals, is literally the stuff of miniseries.  But given all that is currently unfolding at NBC News surrounding Ronan Farrow’s Catch and Kill, Sherman’s reporting is notably absent. Could his role as an MSNBC contributor have muted his coverage? Most likely, the answer is yes.

Sherman’s reporting has led to numerous Mediaite posts as well, and we have even lauded him as one of the most influential reporters on the media beat. Notably, he also made our list of the most overrated. Here’s what we wrote in 2017:

Astute readers of this post will note that, yes, Gabe Sherman is included in both ​most ​i​nfluential and ​overrated ​galleries. How can that be? Well if all that Sherman reported ​was his coverage of the demise of Fox News from the past year or so, ​then he would have no reason to be here. But as Mediaite has reported and many sharp media observers know, Sherman has some great sources and some less than great sources. He mostly gets it right these days, but has gotten enough wrong over the past few years that the praise regularly heaped on his reporting (including by many here at Mediaite) is over the top and ought to be far more restrained. If he helped bring down executives and anchors at MSNBC or CNN, would he be as much of a media darling? Just asking.

That commentary is proving to be prescient. There was no media reporter more interested in covering the story surrounding Fox News chief Roger Ailes and allegations of sexual misconduct than Sherman. Writing for New York magazine at the time, Sherman’s indefatigable reporting can be directly tied to Ailes’ ouster.  His book The Loudest Voice in the Room was eventually made into a Showtime series.

Though Sherman plays a different role, CNN’s Brian Stelter and Fox News Howard Kurtz will often address on-air any controversies surrounding their own outlets, though often in materially different ways. In other words, there are ways to address these sorts of stories without biting the hand that feeds you, a tactic that so far appears to have escaped Sherman.

Is Sherman the first cable news contributor to remain silent about stories critical of the company that signs their paycheck? Absolutely not. But he is not above the same sort of criticism that he has reported either.