Is Now The Right Time For A $376 Million White House Renovation Project? 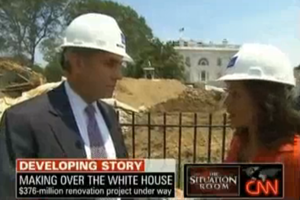 Renovations have begun on the electrical wiring and plumbing of the White House, adding up to somewhere along the lines of $376 million. On-site construction administrators say the nearly century-old infrastructure is dangerous, but some are questioning whether, given the current economic situation, now is the right time to spend money on this. Surely the money can be better spent?
The funding for the work was approved by Congress in 2008, the work scheduled to last four irritatingly loud and messy years. The reason? Much of the electrical wiring and plumbing in the offices of the White House– including most of the West Wing and the situation room– had been causing problems for some time. It’s being called a “facelift,” but it seems not to involve any aesthetic improvements, merely functional ones.

Despite this, $376 million is a gigantic figure for anything, especially during a time when jobs are increasingly scarce and the economy, more than anything, appears in need of renovation. CNN visited the site of the construction work and posed the question of the renovation’s timeliness to Bob Peck of the General Services Administration, which oversees the project. He responded, “It doesn’t do a whole lot of good to have a building that’s the image of the free world standing up there and not functioning well.”

Relatedly, this is not the first time that a major American landmark is extensively renovated, and it’s hard to imagine anyone griping about the last time it happened– President Ronald Reagan‘s multi-million-dollar Statue of Liberty project. Those renovations on the Statue of Liberty and Ellis Island, though, to be fair, were mostly funded through the then newly-established Statue of Liberty-Ellis Island Foundation (SOLEIF) as well as federal funding. Perhaps taking a leaf from President Reagan on this issue and marking the culmination of the renovations with a celebration would give the construction the patriotic feel that will help ease those concerned about the costs.

Coverage of the construction via CNN below: