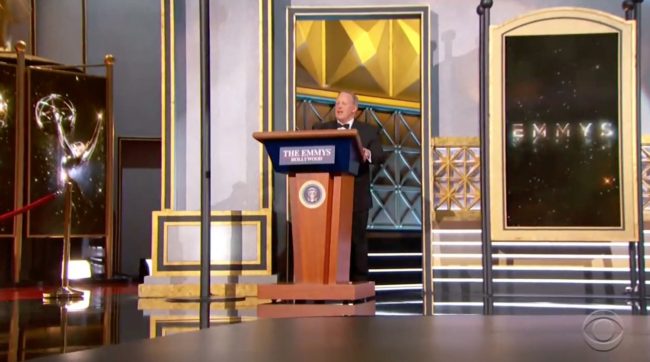 The question of whether you found Sean Spicer’s appearance at Sunday’s Emmy to be funny is subjective. Some say yes, others no. But there’s no debating that Spicer’s appearance helped normalize him and his history of lying to the American people.  And that wasn’t lost on too many, as we saw a swift backlash to Spicer joking on the Emmy’s about his lying to the American people Trump’s press secretary.

ThanksBut to be honest, the process of making “Spicey” likeable and normalizing him began long before Sunday night. It started in early 2017 on Saturday Night Live with the hilarious impression of him by Melissa McCarthy. (Ironically, SNL  for its poignant and very funny take down of all things Trump.)

As , the initial reaction by so many to Spicer’s departure by countless people –  including a Democratic member of Congress- was: “We are going to miss ‘Spicey’!”  That was of course due to the way McCarthy had depicted Spicer on SNL as a bumbling guy who was unknowingly being used by Trump.

To be honest, but for SNL’s depiction, these same people bemoaning the departure of “Spicey” would’ve instead likely been discussing Spicer’s history of lies on Trump’s behalf. As a quick reminder, there was Spicer claiming on Day One of his job that Trump’s inauguration crowd was the biggest ever – a tale so tall that Washington Post fact checkers wished they could give it five Pinocchio’s but their limit was four.

Spicer also served up lies to back up Trump’s lie that there was widespread voter fraud in the 2016 election.  And the list goes on and on of Spicer’s lies or complicity in Trump’s lies as they conspired to gaslight us to help Trump.

Thankfully on Sunday night, many called out the Emmy’s for its normalization of Spicer by giving him a platform on the show. (Keith Olbermann dubbed it “validation.”) Even U.S. Senator Brian Schatz (D-Hawaii) took to Twitter to slam Spicer’s appearance with the tweet that went viral: “It is not funny that the spokesperson for the President lied aggressively and frequently, and he should not be treated like a celebrity.”

In the big picture, this one appearance by Spicer isn’t that meaningful – expect maybe to increase his lecture fees. And keep in mind that clearly the goal of Emmy host Stephen Colbert – who has truly led the comedy resistance to Trump-was not to normalize Spicer but to taunt Trump.

But these are not normal times. Trump is not a normal president. He is a serial liar who trafficked in racism, bigotry and sexism to win the White House. And as President, he has turned that hateful rhetoric into policy with his Muslim ban, ending DACA, his ban on transgender Americans who want to serve in our military, pardoning Joe Arpaio, etc.

Bottom line is that we must continue to fight passionately against any efforts to allow Trump- or those who work or worked in his administration – to be seen as normal. Because if one day what Trump and his administration has done is considered normal, it means that that United States of America we love so dearly is dead.